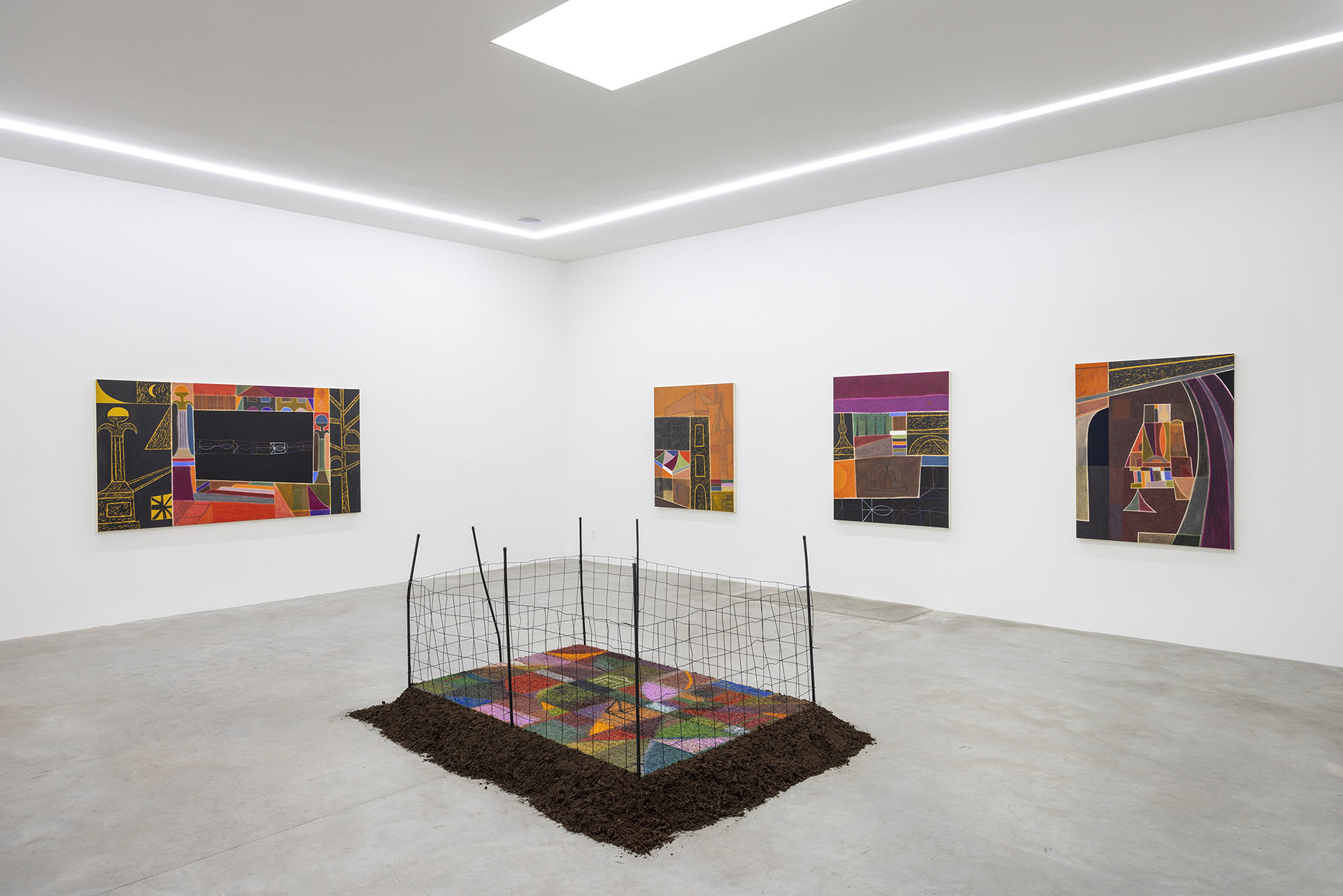 “Here I present to you, the visitor, a slice of the day-to-day humanity that contextualizes my physical reality. I hope to share the seemingly simple civic spaces that shape a sense of place and community from my home to yours. Let’s give charm to the features of Earth where we gather around to celebrate birthdays, where we lay our blankets down to read a book, where we have our first dates at golden hour, where we meet to catch up with old friends, where we congregate as a town to dance in the sun. The public gems that allow us the pleasure to decompress alongside the people that ground us in our tangible locale. Heavy isolation has pushed these spaces to a predominant place in my mind with heightened saturation. Now, more than ever, I want to engage in the mundane of everyday life in order to indulge in the humane we may be missing in our perplexity. So let me go first and show you something from my home.

With references to past, present, and potential future, the work in this exhibition is a sort of love letter and thank you to Laguna Peralta, more commonly known as Lake Meritt, the jewel of Oakland, California. It’s a space I would consider the recreational and social engagement center of the Town. There, on any given day, one would find a sample of the subcultures that define such a diverse region. At the lake as in the paintings, a vibrancy cuts through the weight of troubled times. So let’s walk an evening lap around the lake. See how people come together and acknowledge life. Hear the sounds of everyday Bay Area motion.”

Laguna Peralta, the jewel of Oakland, the lake of a thousand smells, a hunting ground for the Ohlone, the indigenous people of the land. It was once referred to as Merritt’s Lake, named after the mayor Samuel Merritt, who transformed the lagoon into a lake and the surrounding lands into prime real estate. In order to avoid stray bullets from local hunters, Merritt managed to convert the lake into America’s first wildlife refuge in 1870 so nobody would be shot accidentally when resting on their porch or playing in the beautiful nature surrounding the lake. Cut off from the sea however, the new lake became polluted and was eventually nicknamed “the lake of a thousand smells” by locals. More preservation efforts ensued. Once reconnected to the sea, wild salmon returned, and birds from around the globe visited on their migratory paths. Although a public space, and in principle accessible to all, issues and conversations regarding gentrification, race, preservation, and ownership still surround the jewel of Oakland (1).

This story of continuous transformation is the point of departure for Muzae Sesay’s anthropologically angled exhibition. For the past year, Sesay spent time around the lake, observing, being, participating, photographing, lingering, sketching, relaxing, laughing, snacking, and creating audio field recordings. He did laps around the perimeter of the park from sunrise past sunset, part flâneur, part adventurer and local resident, enjoying moments of recreation and reflection in a period of pandemic isolation. Sesay’s respite evolved into an interest in the relationship between the particular and the universal, acknowledging that belonging is simultaneously metaphysical and an embodied state. Laguna Peralta transplants this state to Copenhagen, Denmark. Through six large paintings, a sound piece consisting of a 57 minute field recording of Sesay doing a loop of the park, the exhibition presents a vivid investigation, interpretation, and translation of the experience, history, and potential of a place: fragmented, curious, close, abstract, present, and always in flux.

Muzae Sesay (he/him), b. 1989, Long Beach, California, US, lives and works in Oakland, California, US. Sesay’s artistic focus derives from a lifelong commitment to understanding our collective relationship to space, memory, community, and the perceived truths within them. From that foundation, his artistic practice has thematically revolved around the merging of these relationships to form paintings that provoke social reasoning and induce the viewer’s agency in the navigation and narration of imagery. Current work connects with the feelings that arise from testing the absoluteness of the strict and rigid aspects of physics and realism found in architecture, design, and our built environment. Utilizing skewed perspectives of space and shape collapsed into flat two- dimensional planes, Sesay creates surreal geometric interiors, exteriors, landscapes, and structures—presenting a situation in which to be experienced and explored. Inspired by ideas of cultural reflection and developed by questioning the validity of remembrance, his work often depicts worlds created in response to a social introspection and a continual challenge of perceived reality. This process involves taking imagery from the physical world and reducing them to rudimental forms that then populate fragmented universes compiled by perspectival fallacies and tied together in various compositions that unfold in painting, sculpture, public interventions, and immersive installations. The viewer is compelled to understand the space, question its dimensionality, dive inside and walk around. 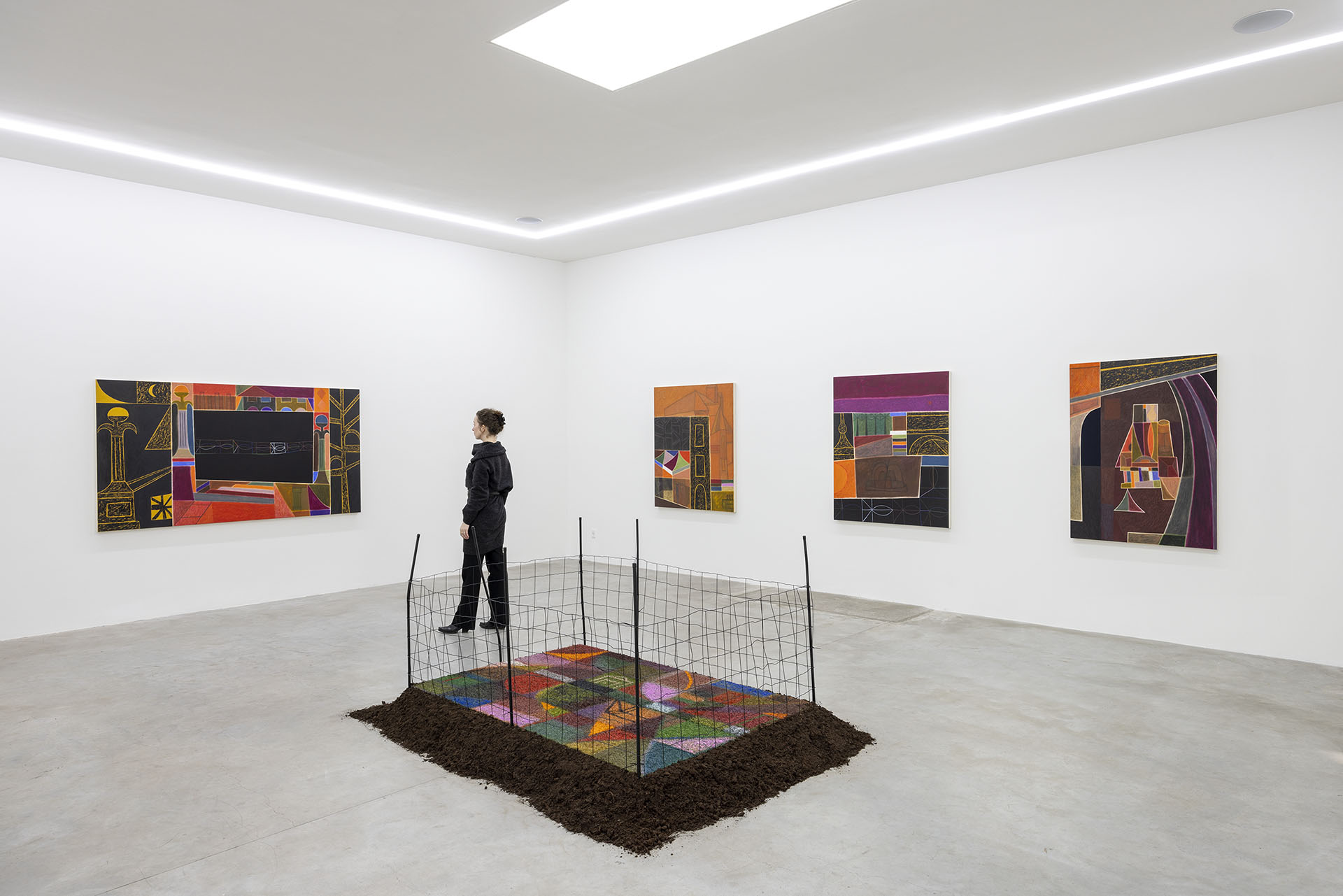 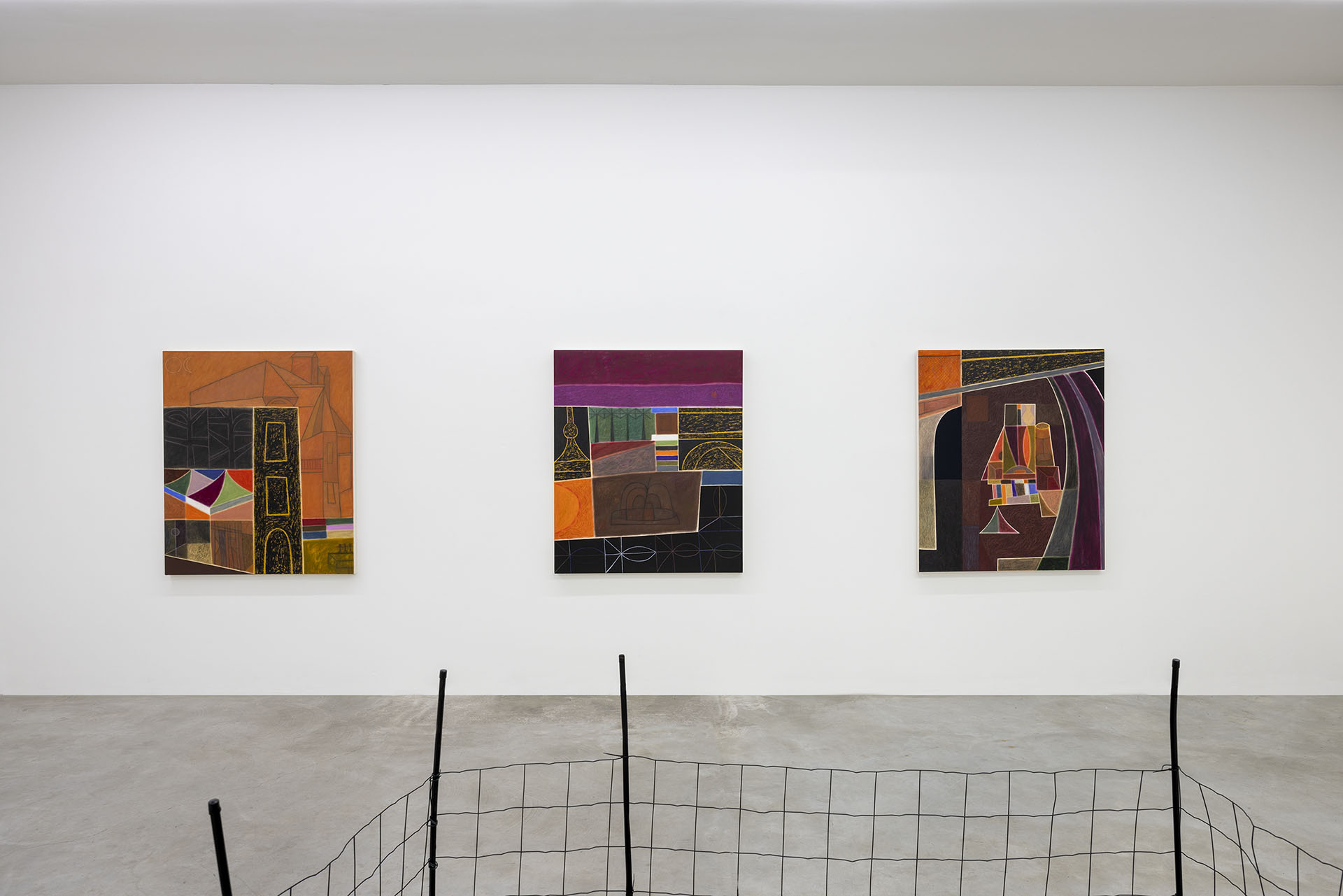 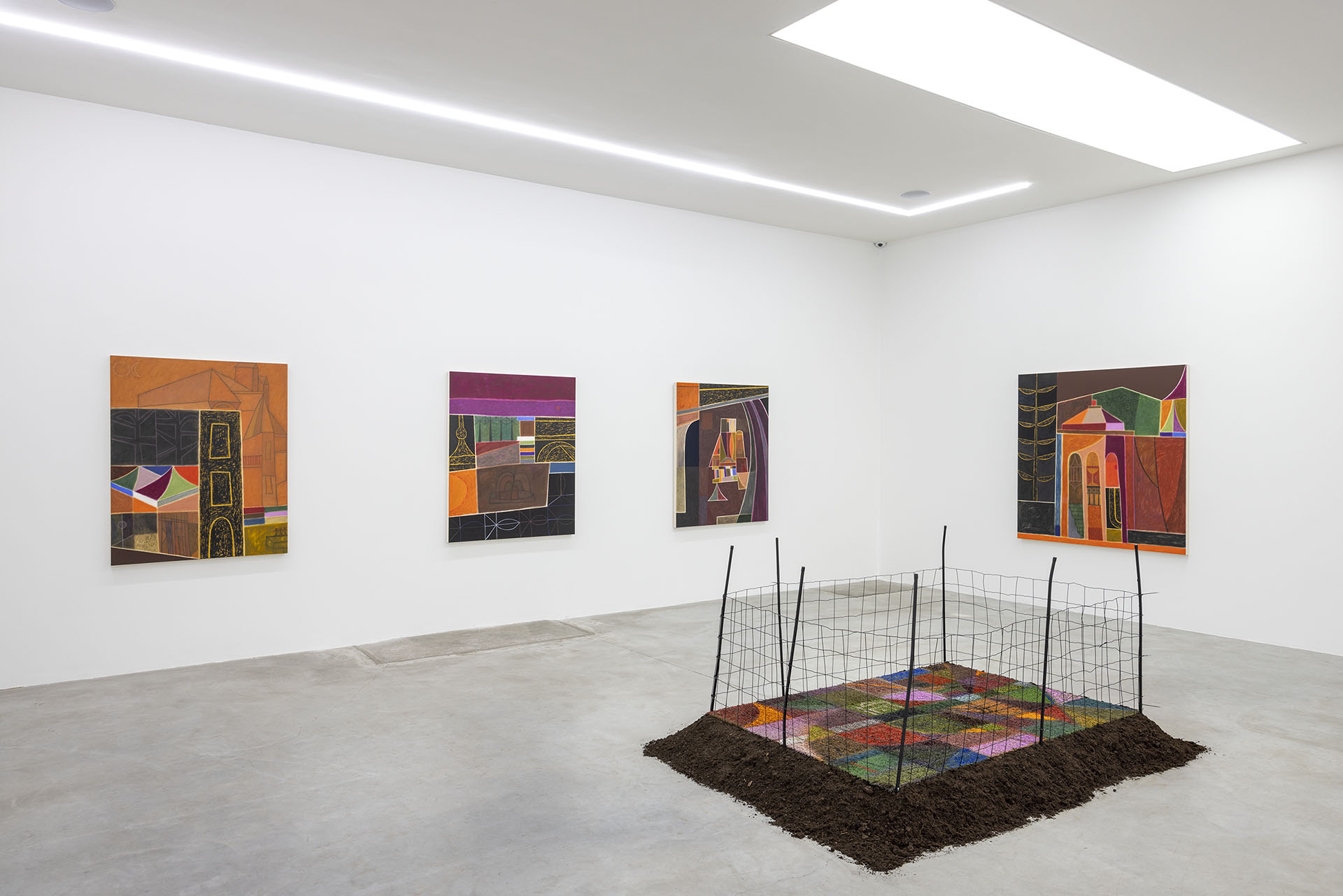 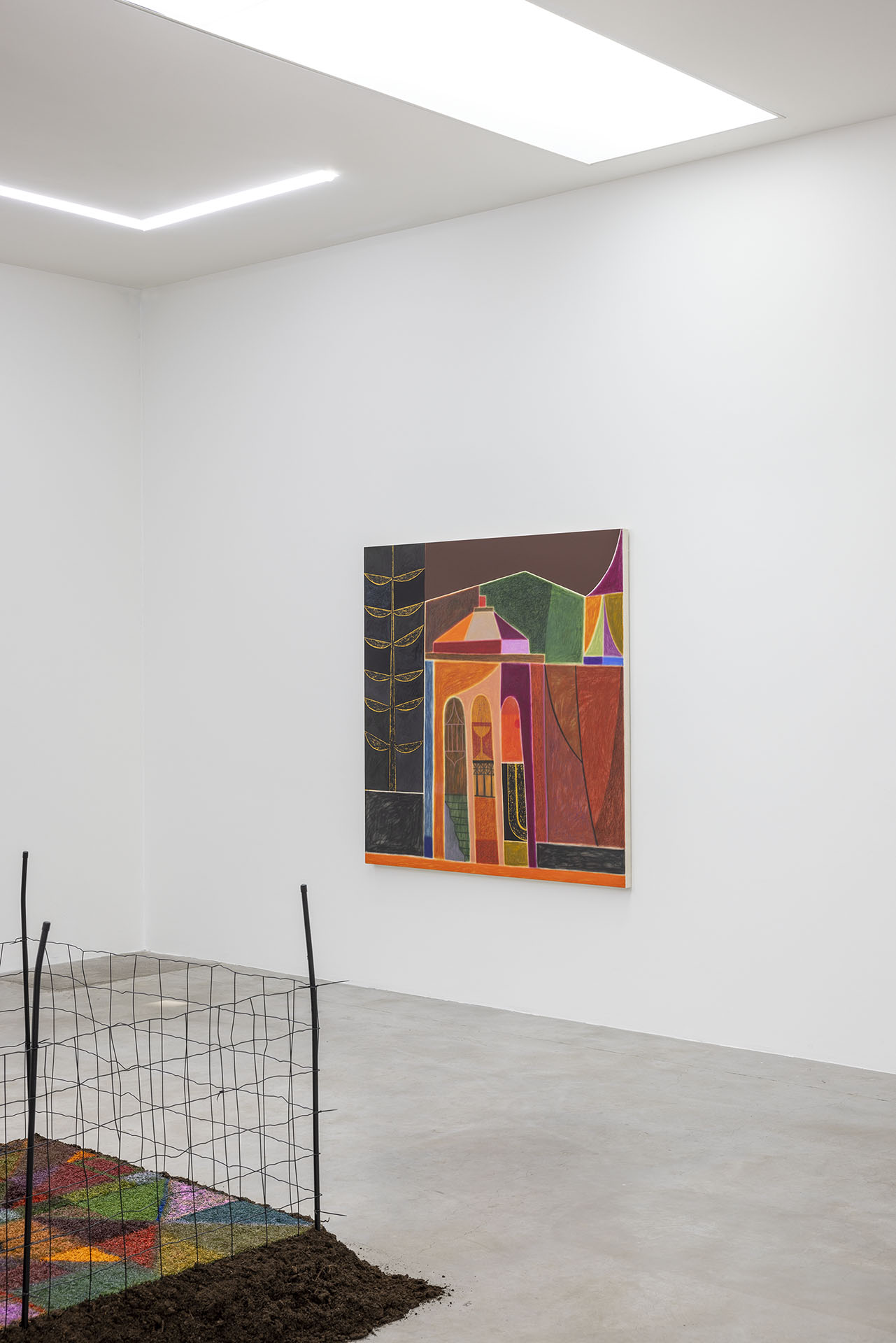 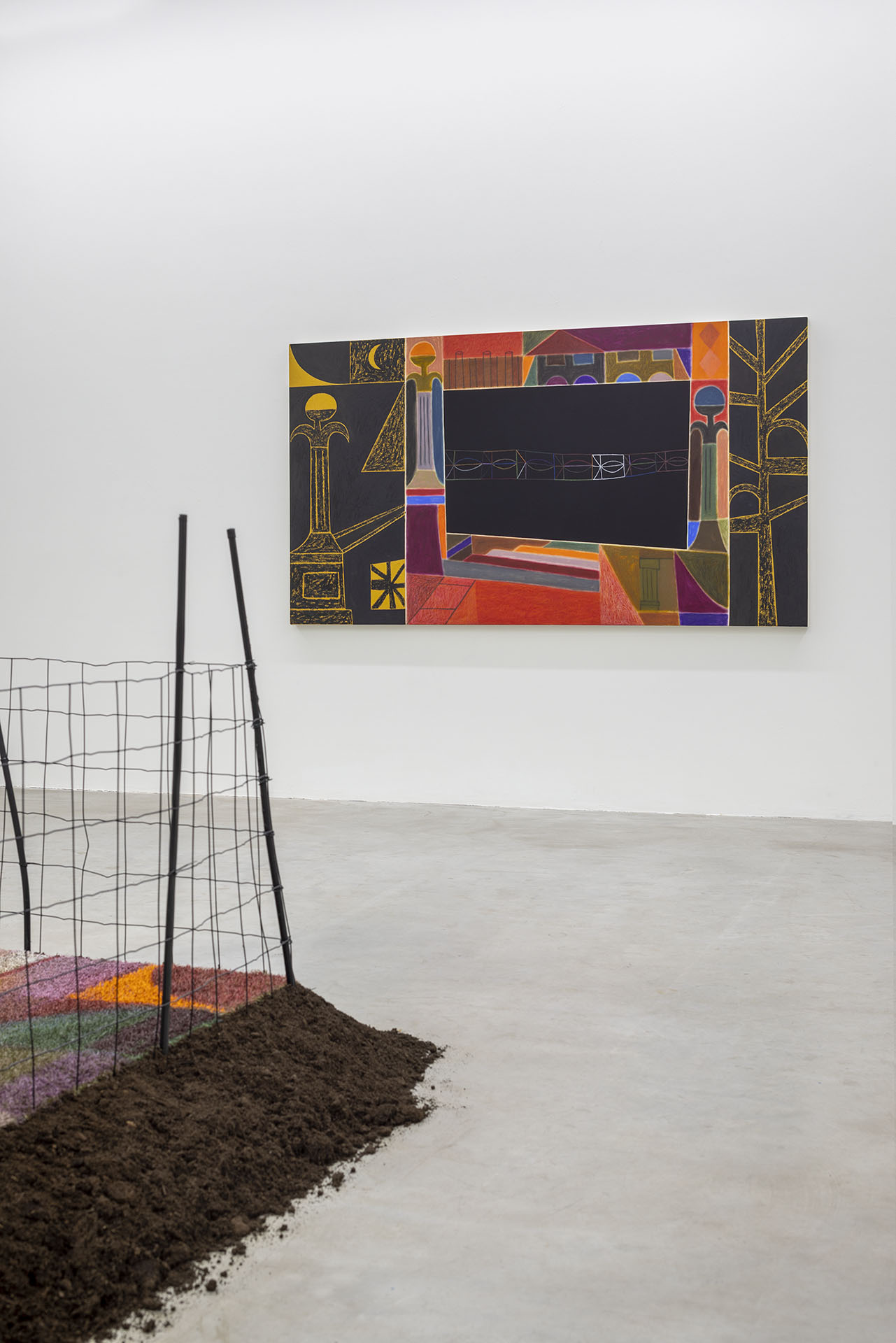 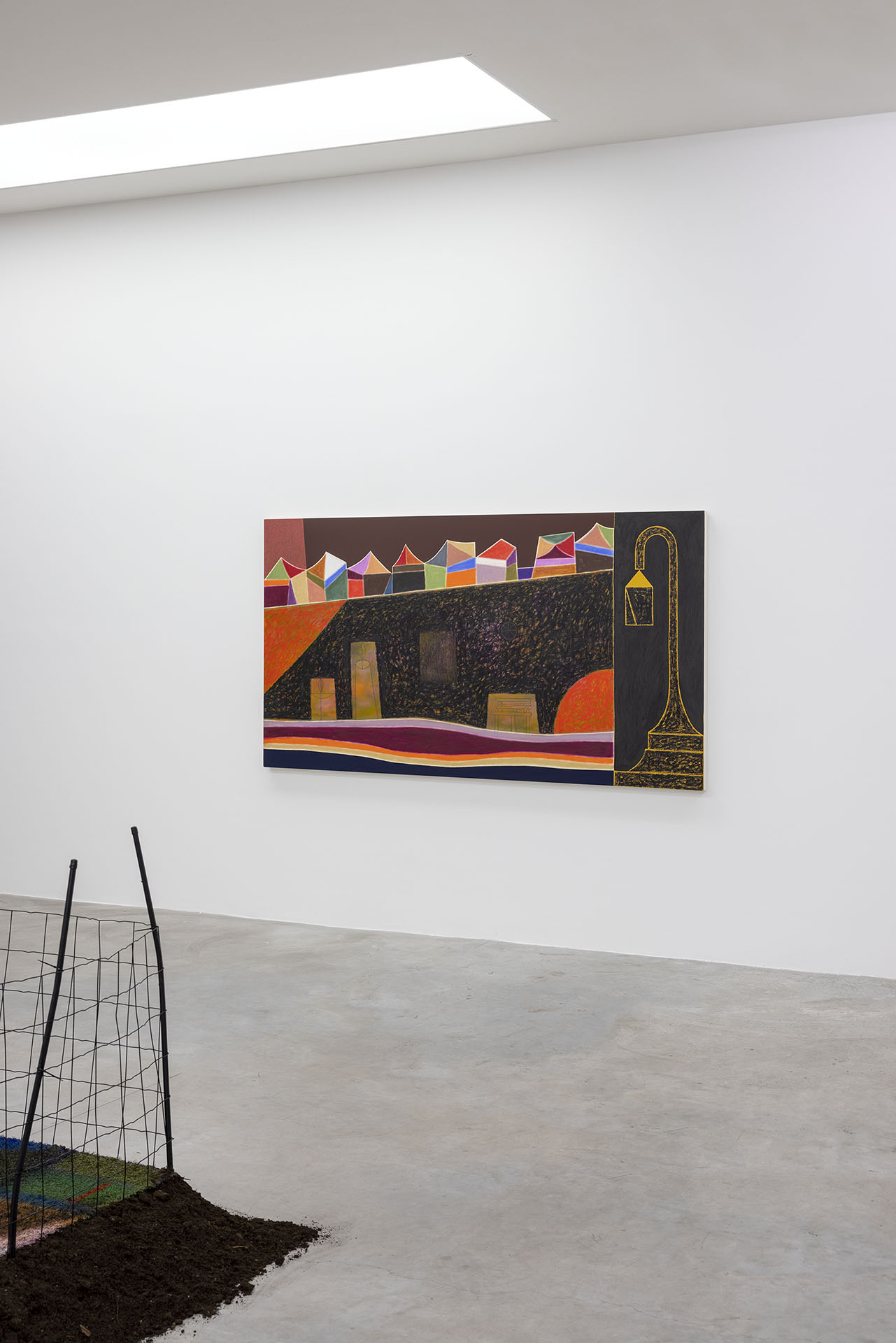 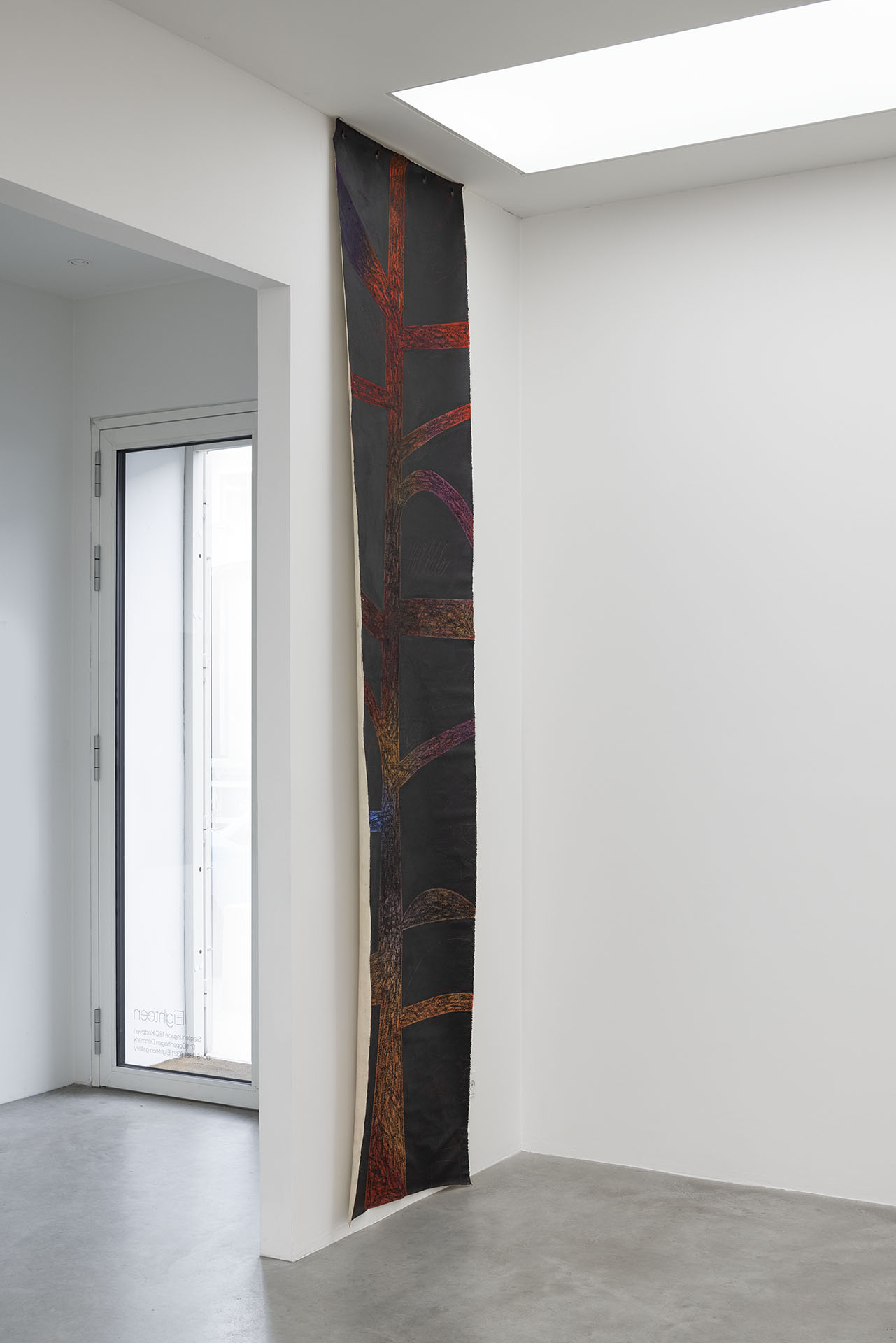 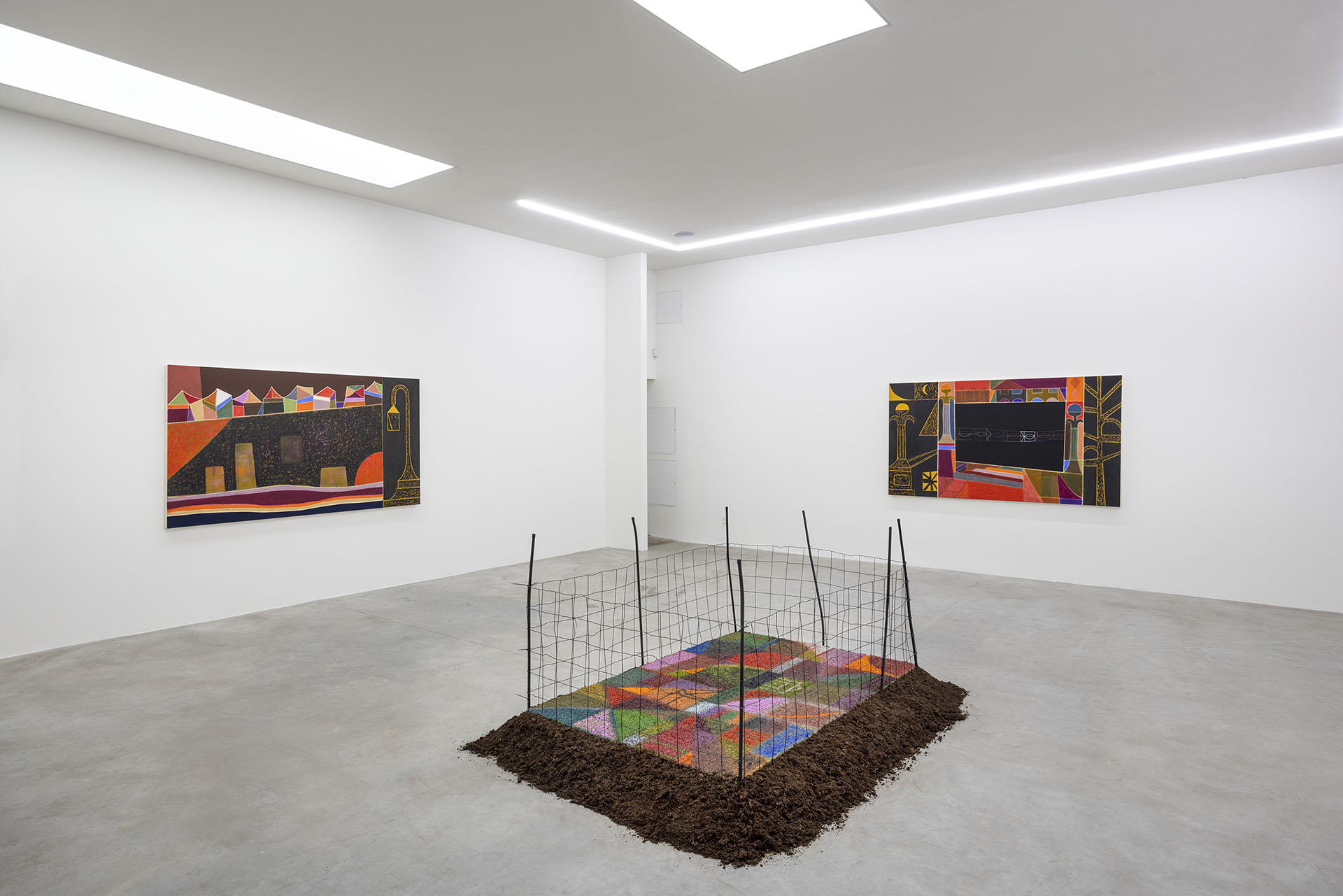 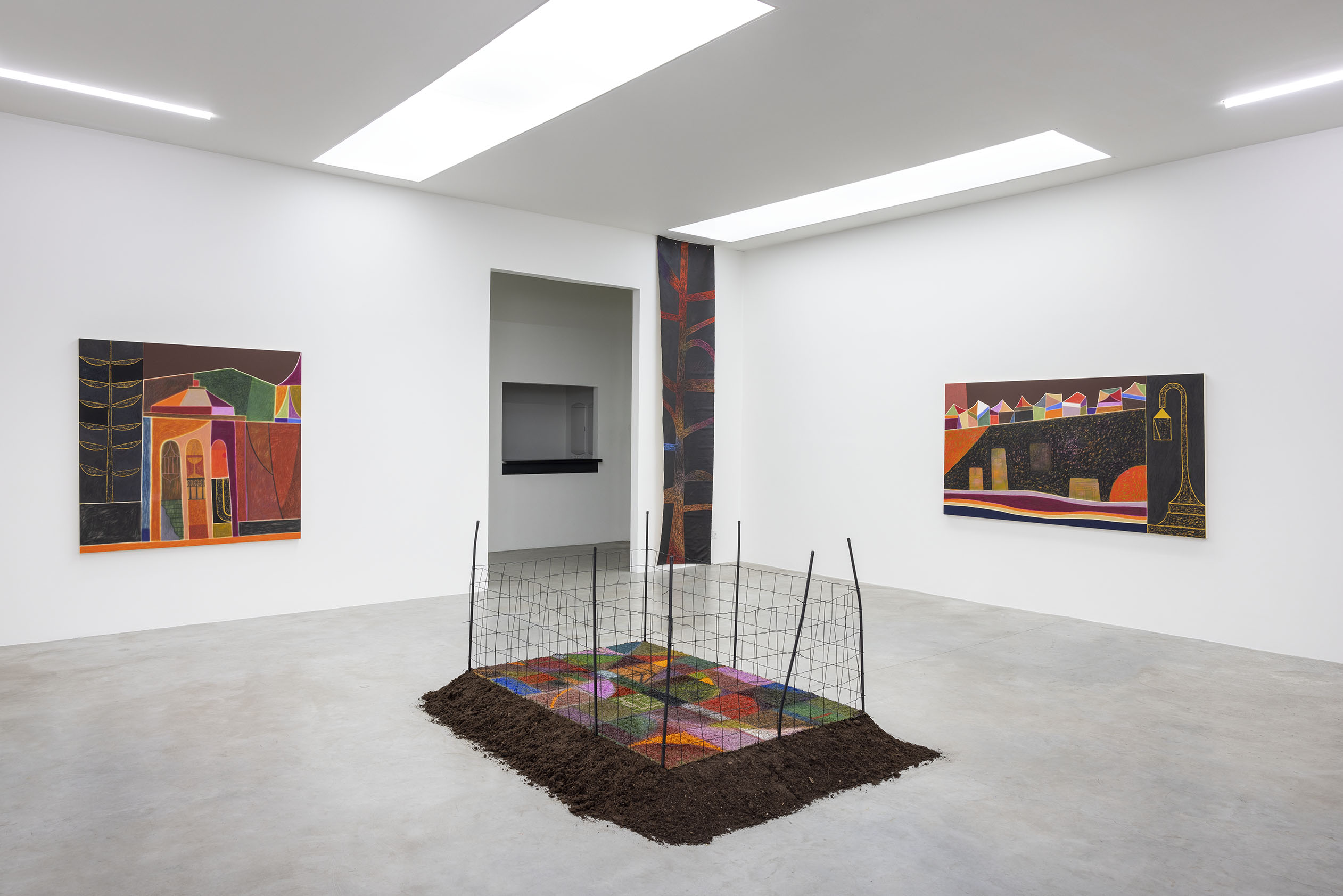