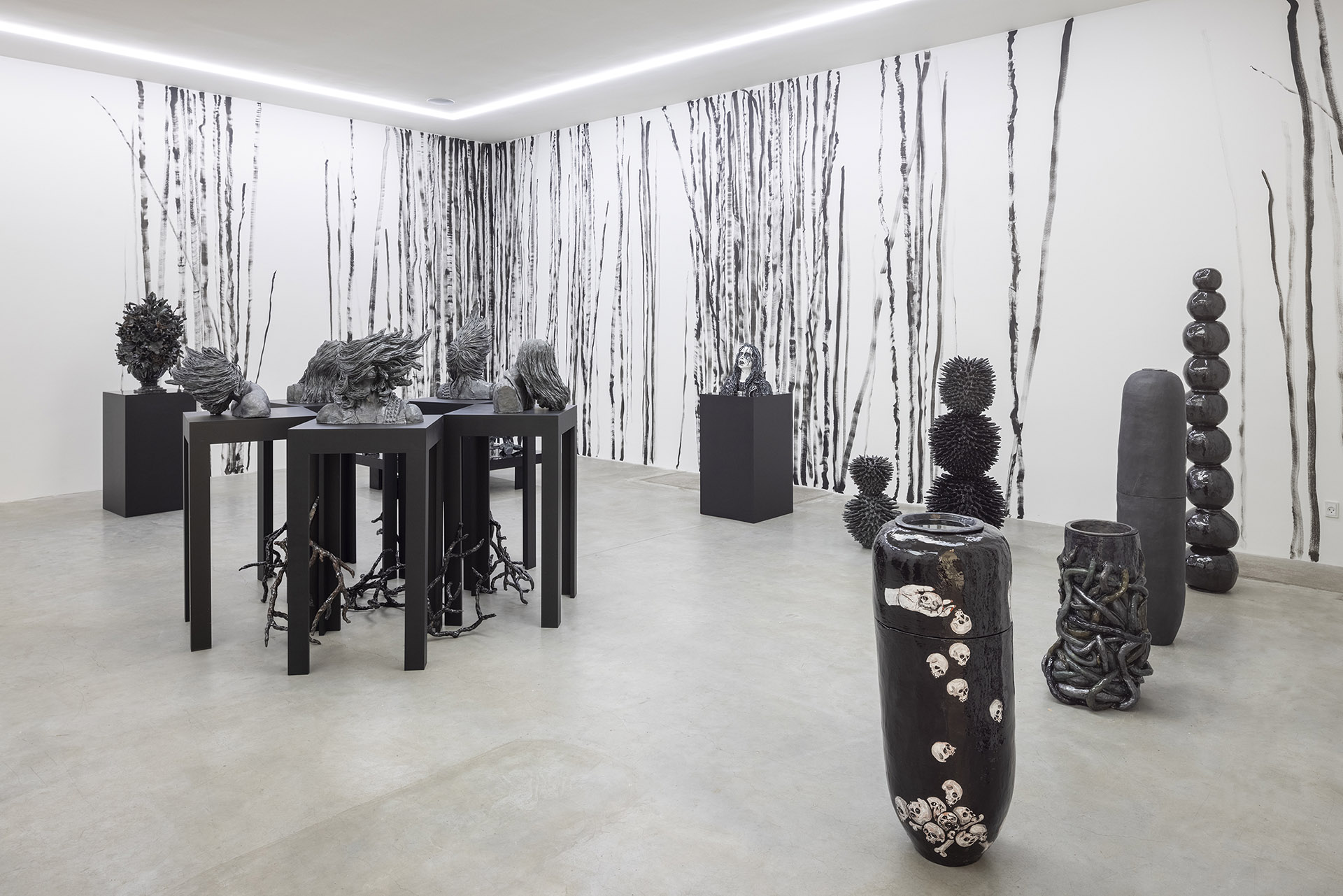 And the Forests Dream Eternally
A solo exhibition by Rose Eken

A sublime darkness has fallen upon Rose Eken’s habitually bright and playful visual universe; step through the looking glass and emerge in a parallel world of sensual beauty and abyssal horror. The artist’s fifth solo exhibition with V1 Gallery / Eighteen transforms the white cube of Eighteen into an occult forest – here amid the gloomy silhouettes of naked tree trunks, we stumble upon a strange clearing, in which a seemingly surreal tableau unfolds. Monochrome black skulls, ashtrays, tarot cards, masks and ravens mingle with Lovecraftian ceremonial vessels and lush displays of magical, deadly botanics, suggesting that some supernatural ritual has taken place. While Eken revisits her familiar vanitas motifs in the exhibition, they seem to materialize as shadow versions, bled of their usual lifelike colors. Rendered in seductive combinations of glossy blacks, matt steel greys, deep burgundies, muddy greens and aged gold, the exhibition ushers in a new direction for the artist, away from faithful representation and into the realm of stylized symbolism.

Indeed, a blackening [1] of her own visual language is Eken’s challenge to the mandate of homogeneity as well as her loving homage to black metal and its infamous aesthetics - referencing iconic bands such as Behemoth and Grave and affectionately sculpting the members of Danish outfit Slægt, captured mid performance, in a series of intricate “hair”-busts. Controversial and often regarded as the most extreme of subcultures to arise from the musical landscape post punk, black metal rejects the hypocrisy of conformity with both violent rage and profound sorrow, often searching for alternative grand narratives in paganism, horror- and fantasy literature, and ancient mythology. Mourning the loss of our connection to the natural world and the disenchantment of Modernity in an era of ecological crisis, economic- and spiritual poverty, its transgressive identification with despair, desolation and death provides a paradoxically generative refuge for outsiders.

Ever the maverick medium between disparate worlds, Eken assembles a dramatic and empowering anti-mythos, adding her voice to a Zeitgeist of speculation, mysticism and spirituality spreading across our cultural landscape. Modern witchcraft and paganism delves into forgotten, often feminine, knowledge of nature and life, while new wave black metal seeks to amend its old habits of church-burning vandalism and problematic politics. Hence, a new generation of practitioners tirelessly mines the past, present and future for new and more sustainable modes of belonging. Like the witches and priestesses of yore, Eken conducts such spells and rituals through her artistic practice. The present world may be profane and desolate, yet art holds the means of its re-enchantment.

Rose Eken, b. 1976, holds an MA from Royal College of Art, London. She has exhibited extensively in and outside of Denmark. Recent and major exhibitions include Eros Unlimited, Eighteen, Copenhagen, DK; Billboard Istanbul, TR; In Residence, MOCA Tucson, Arizona, US; Afterbeat, Horsens Art Museum, DK, and Remain in Light, The Hole, NY, US. Her work has been permanently acquired by ARoS Aarhus Art Museum, Horsens Art Museum, The New Carlsberg Foundation, and The Danish Art Foundation for Visual Arts. Eken lives and works in Copenhagen, Denmark.

A catalogue documenting the work process and featuring an essay by Heine Hansen, PhD, will also be made available during the exhibition period.

The original score of And the Forests Dream Eternally is composed by Nils Gröndahl. 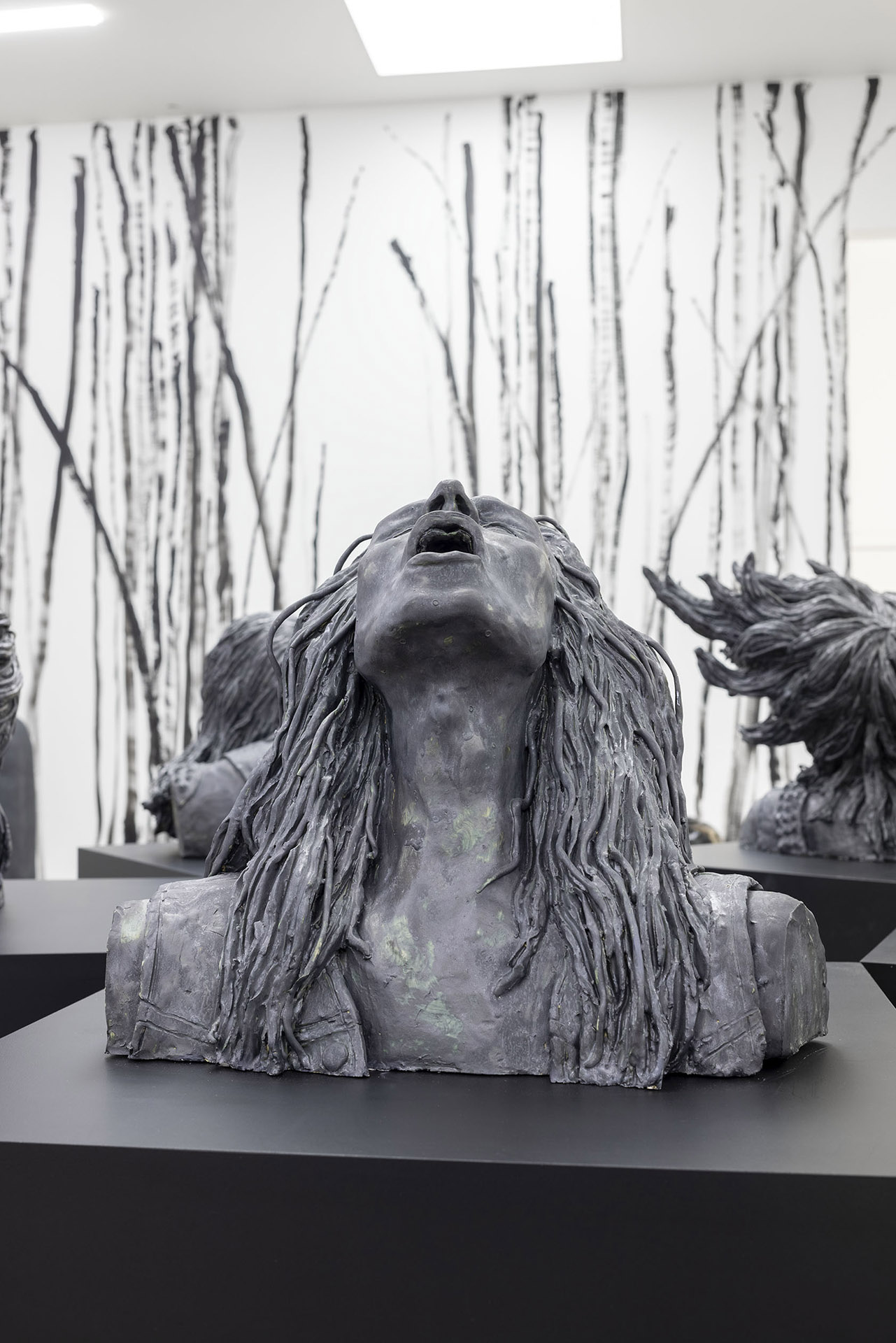 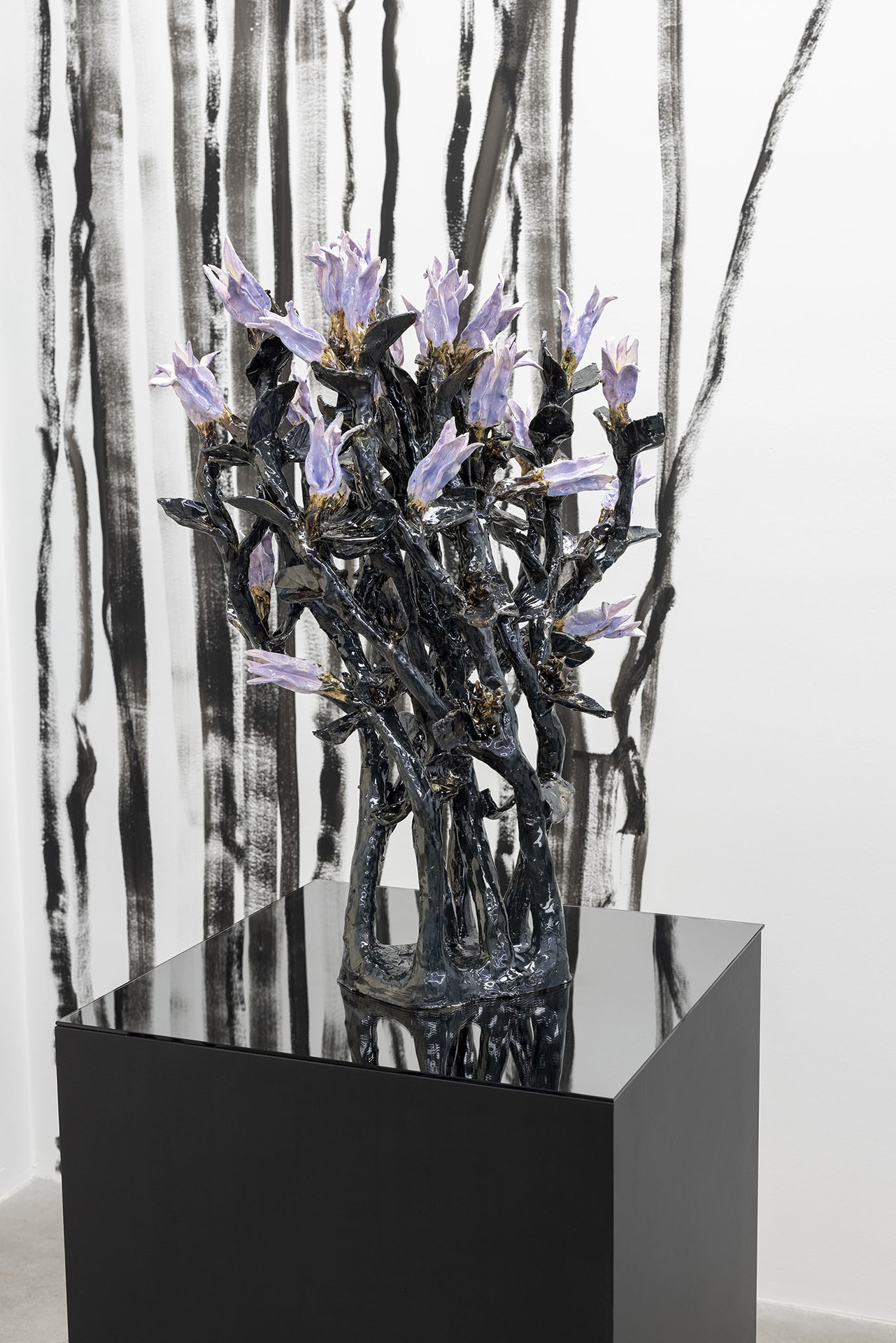 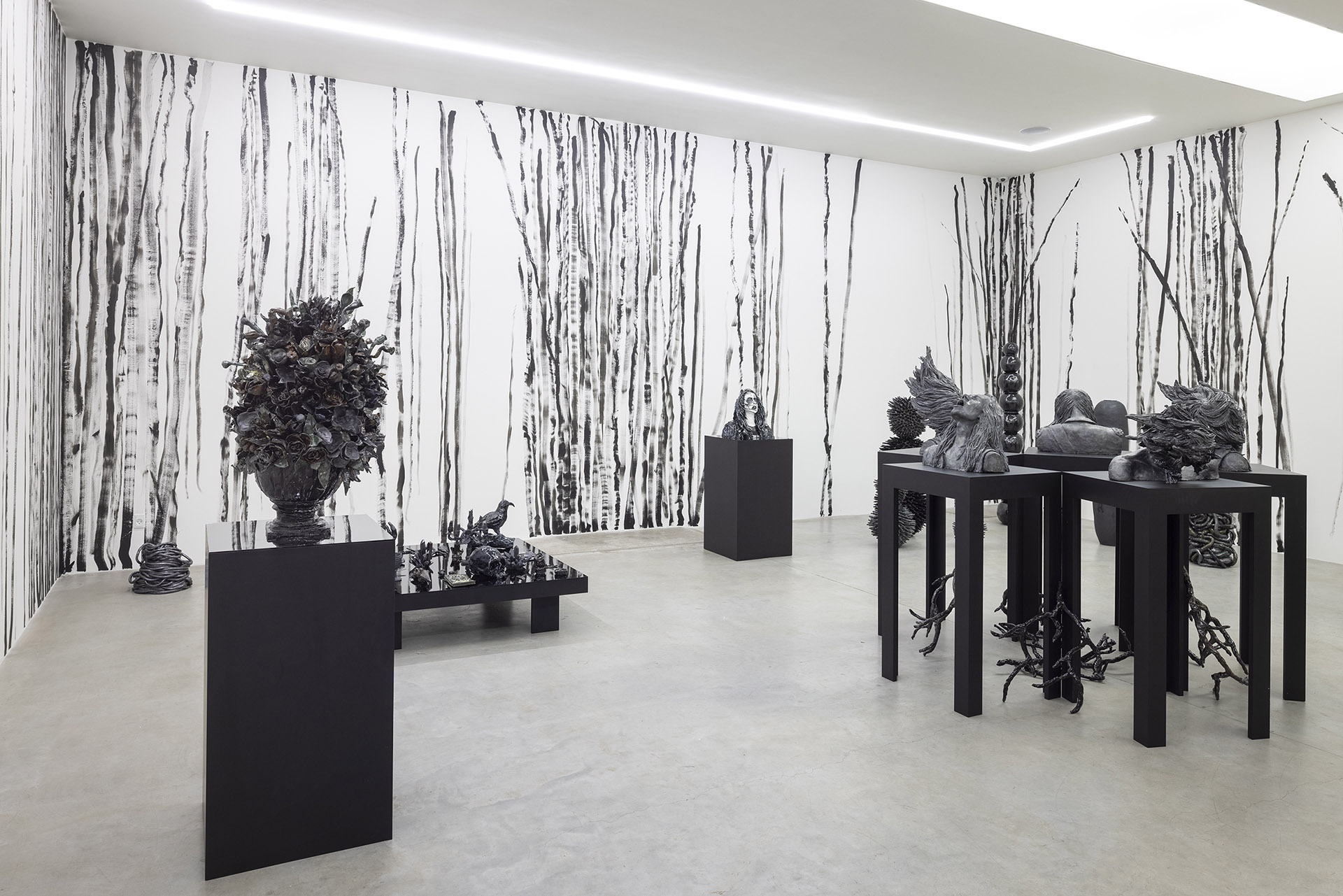 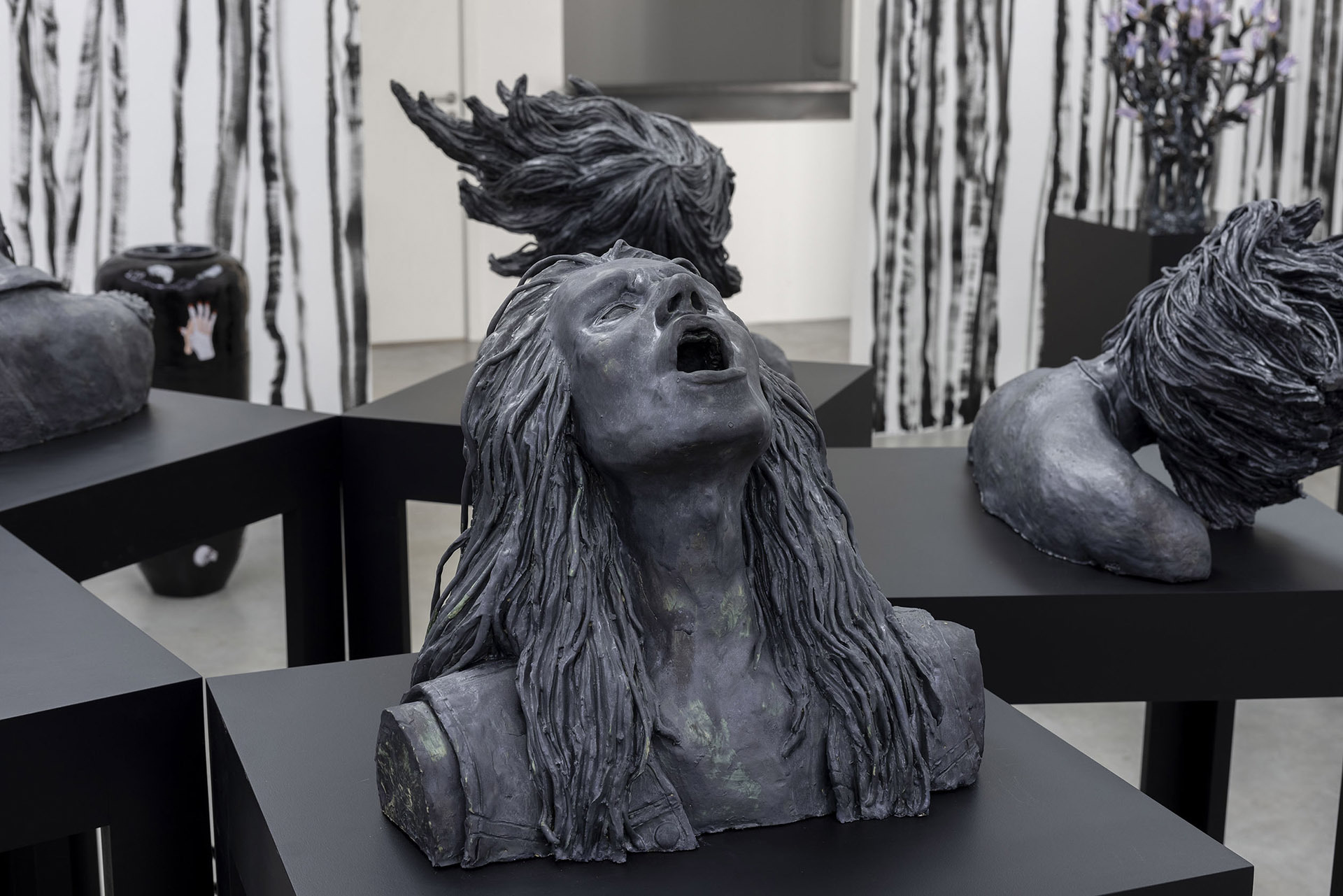 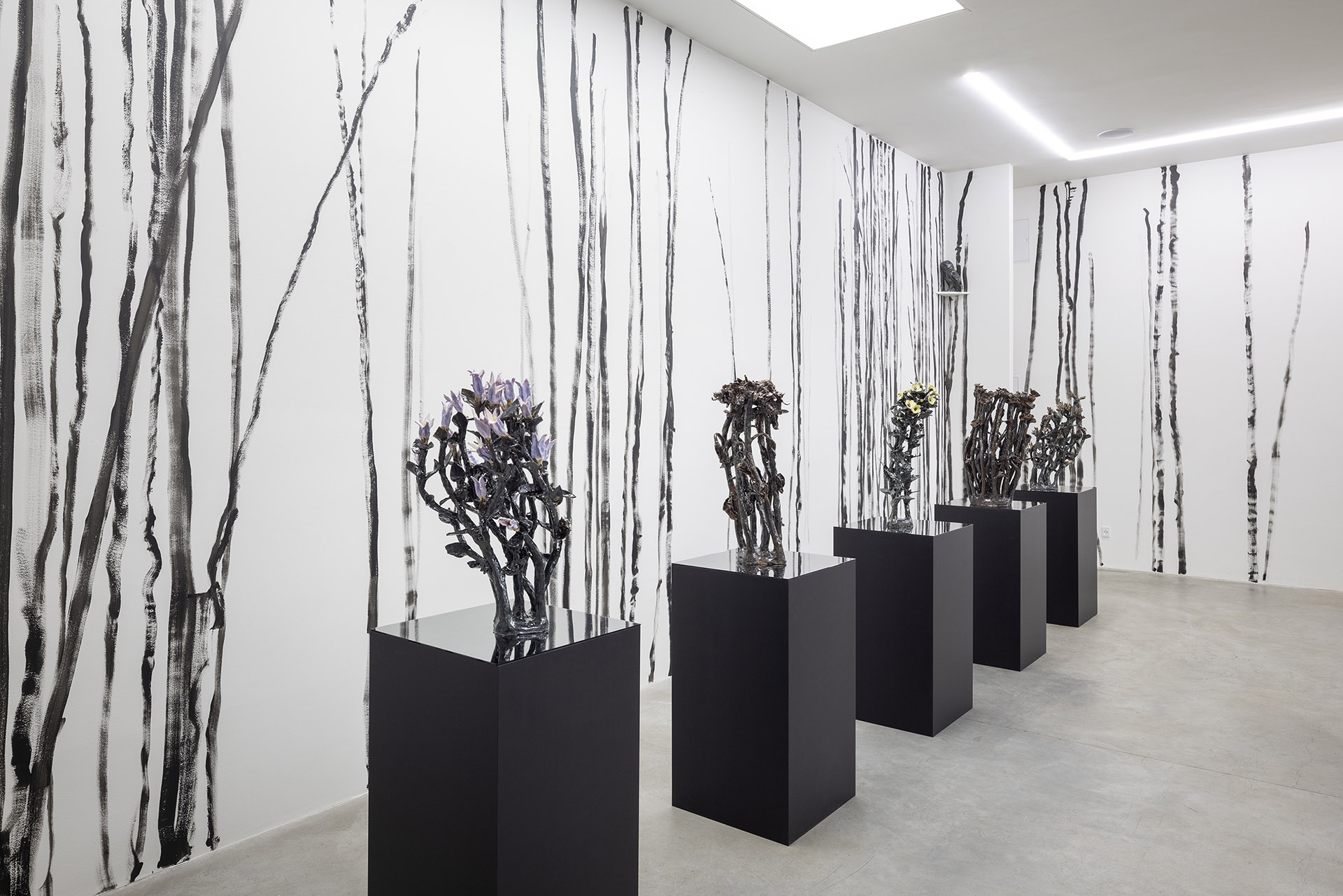 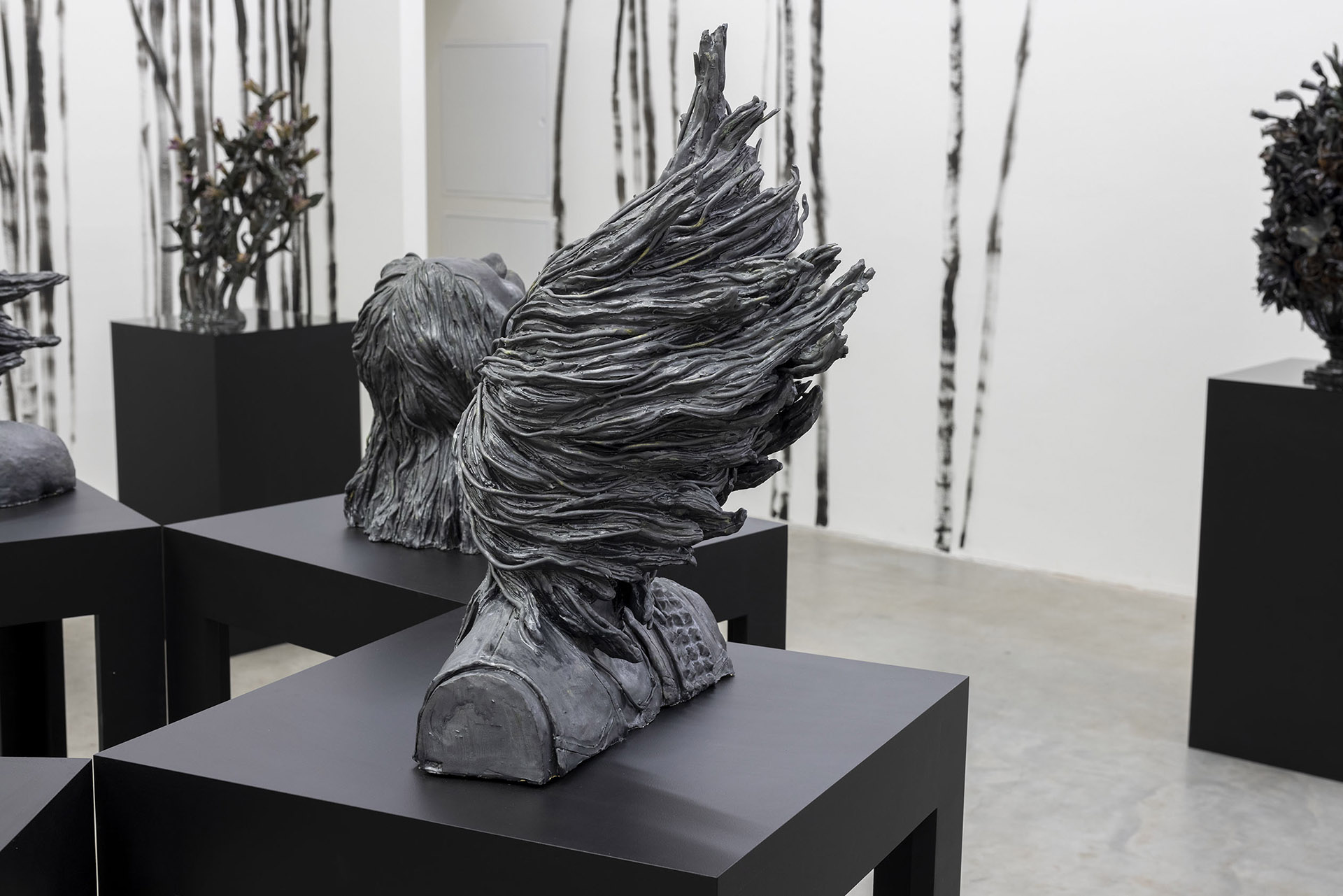 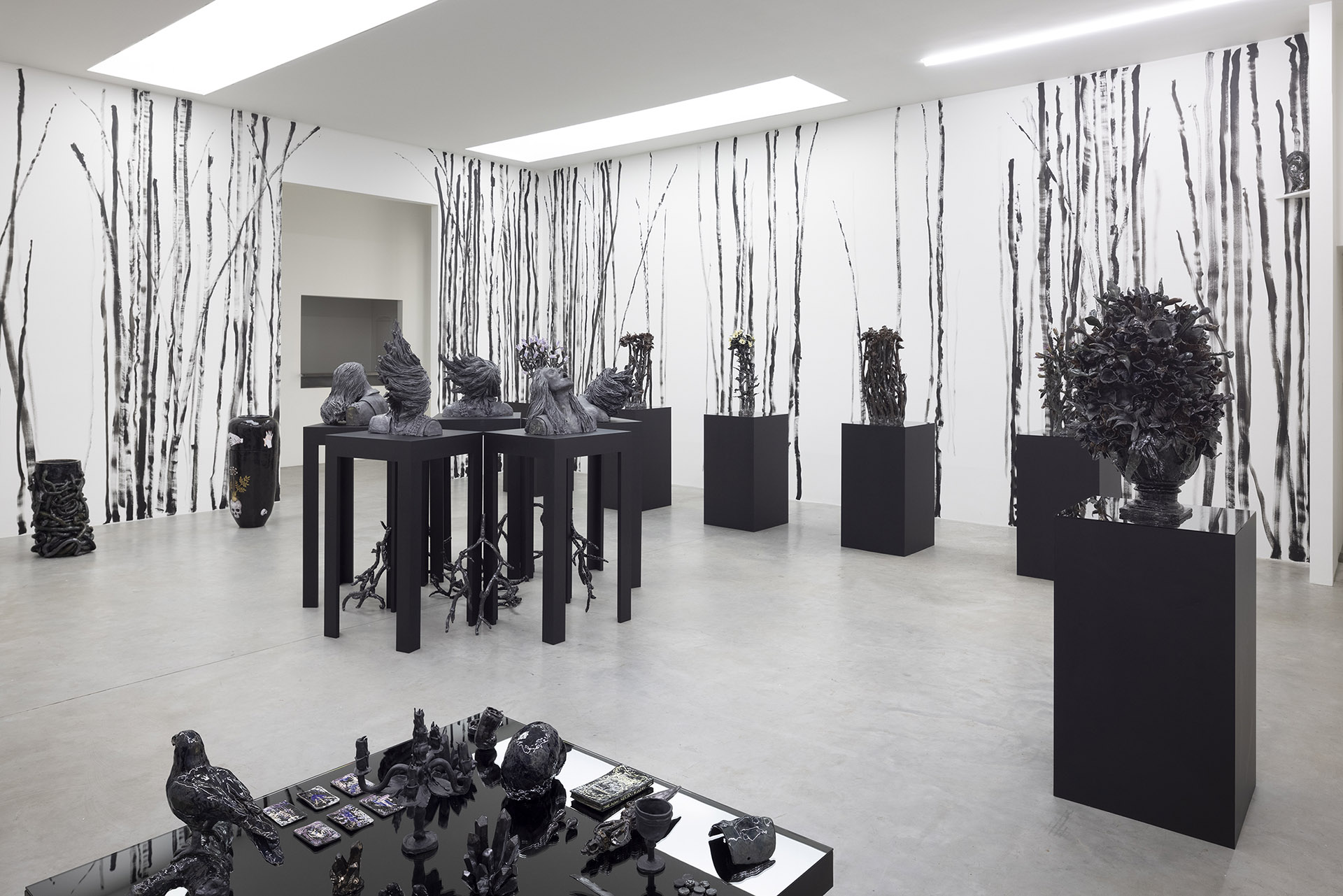 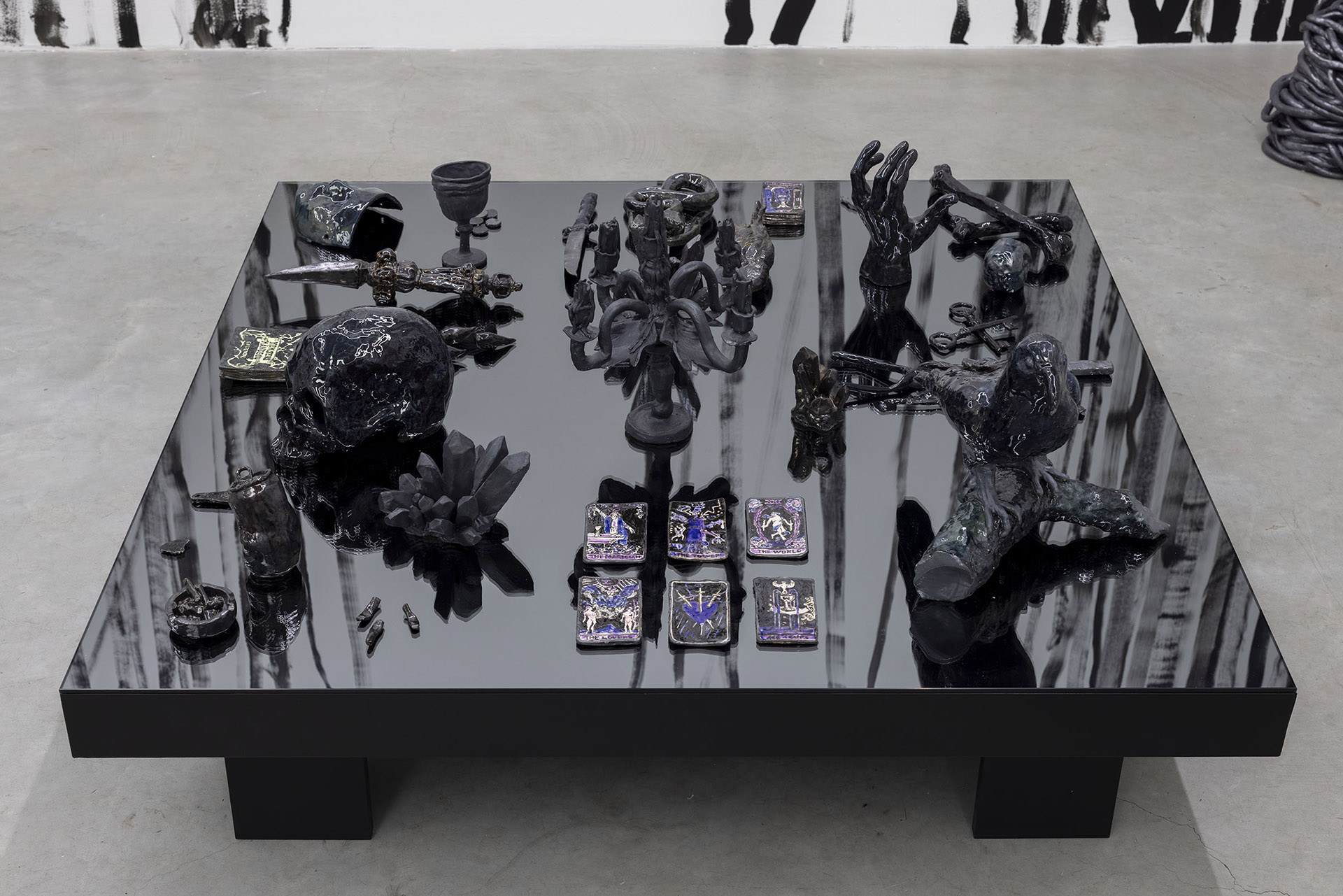 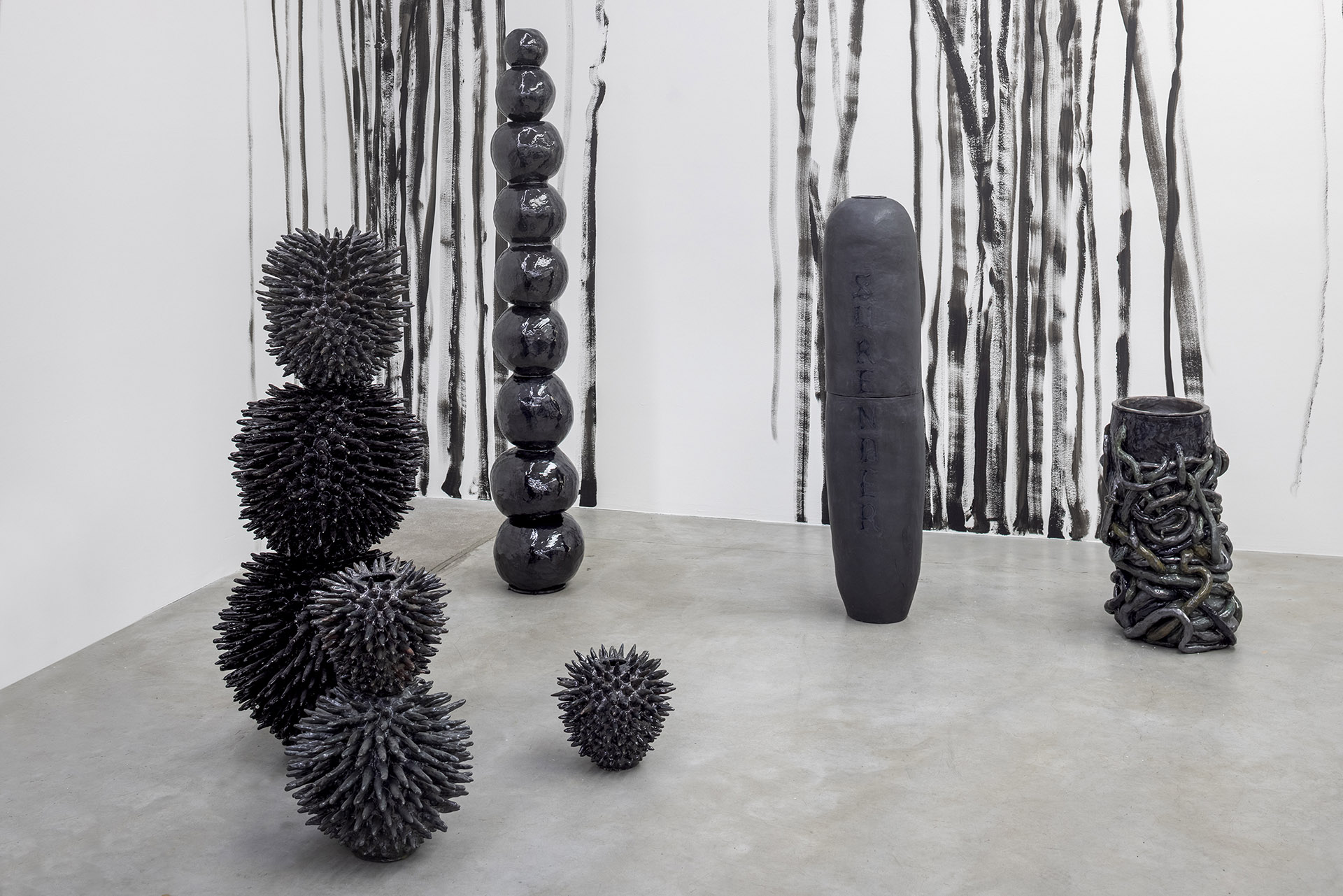 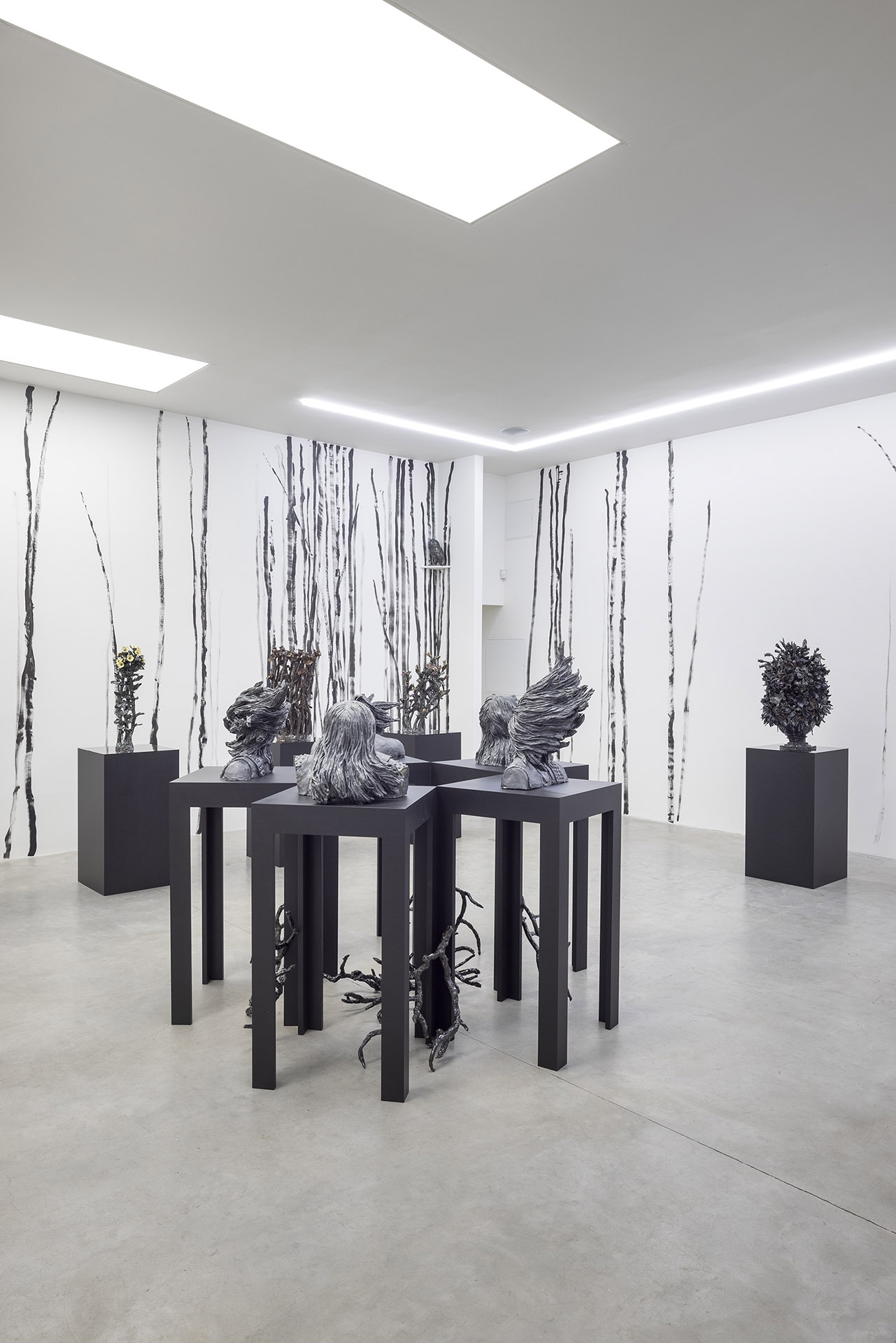 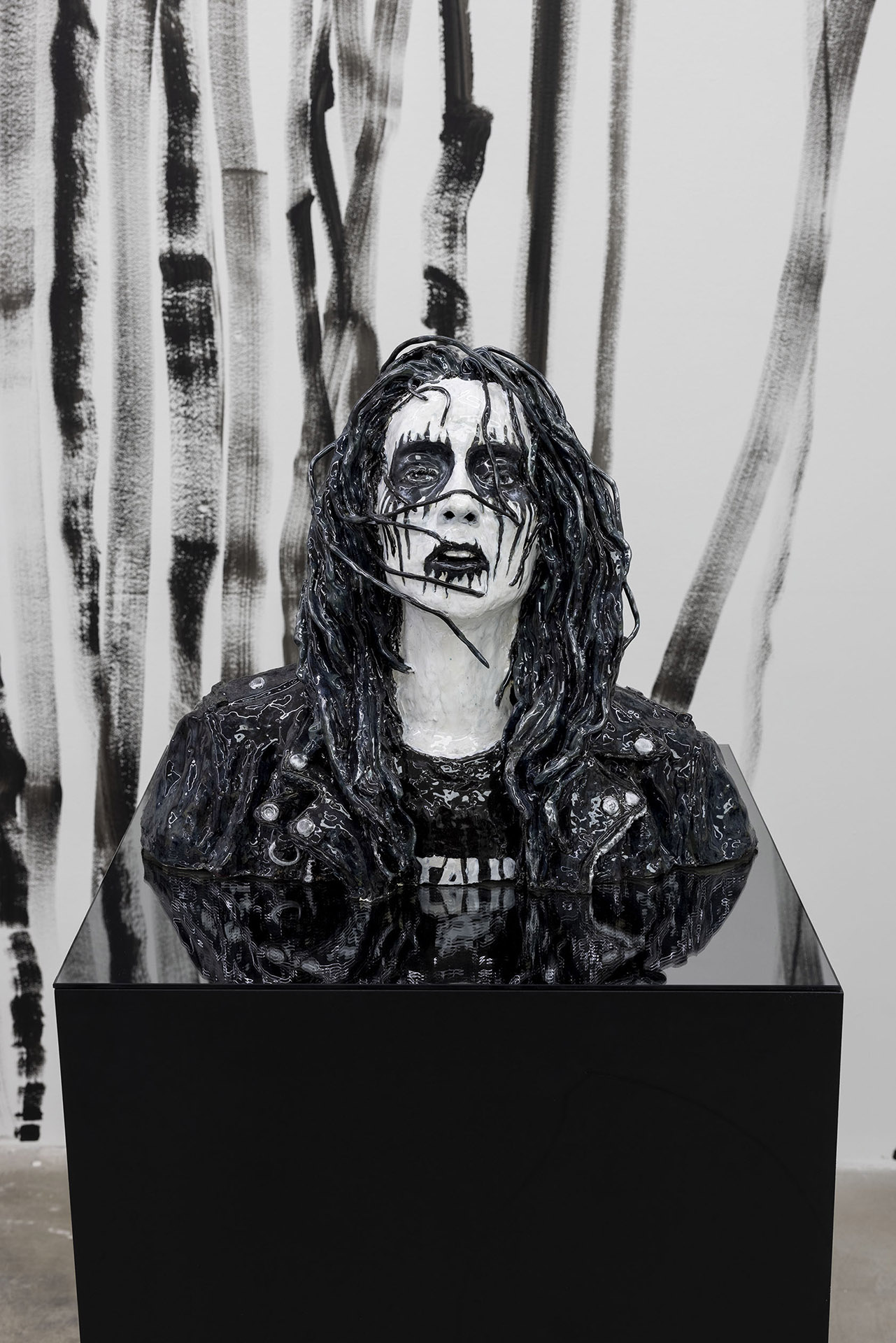 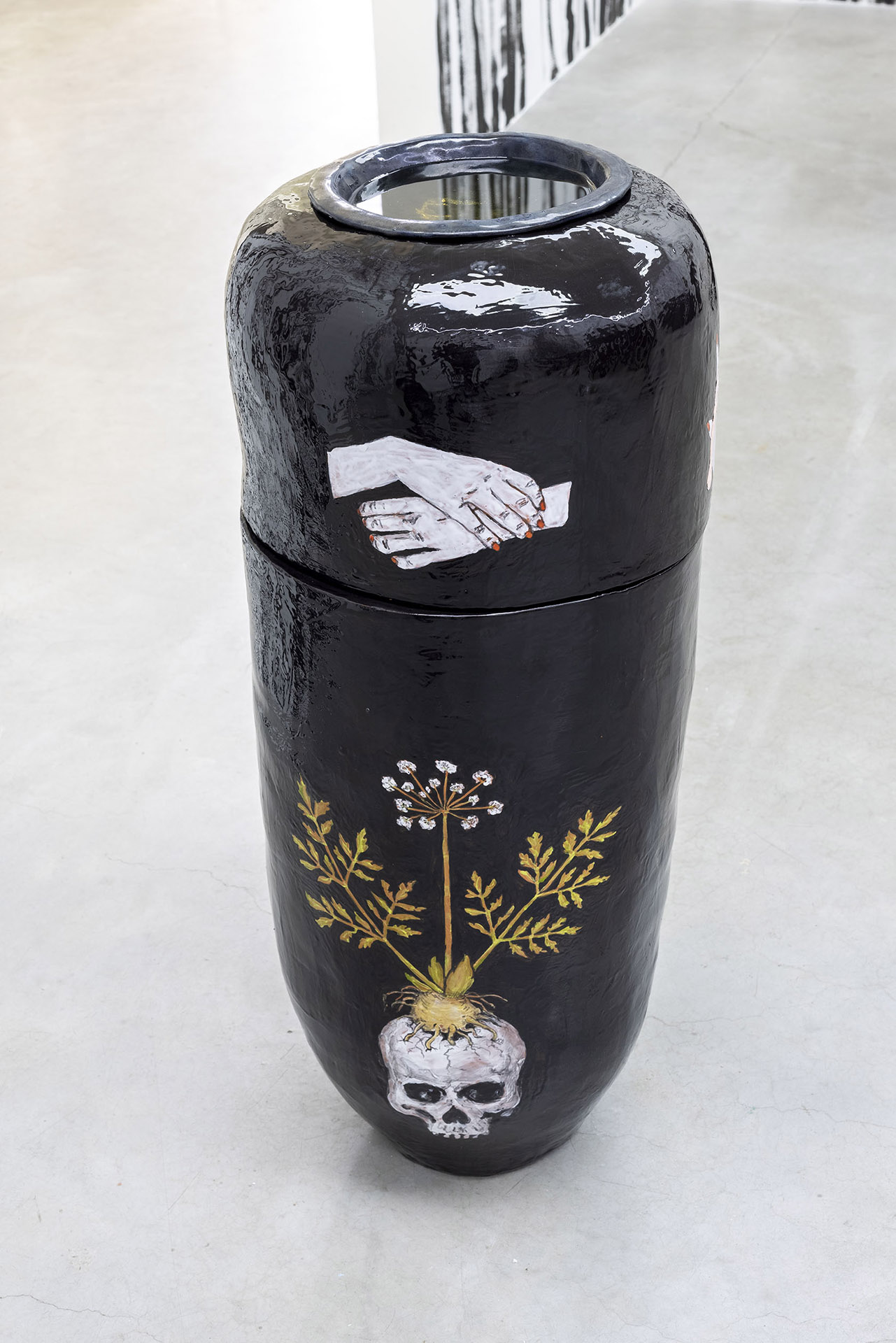 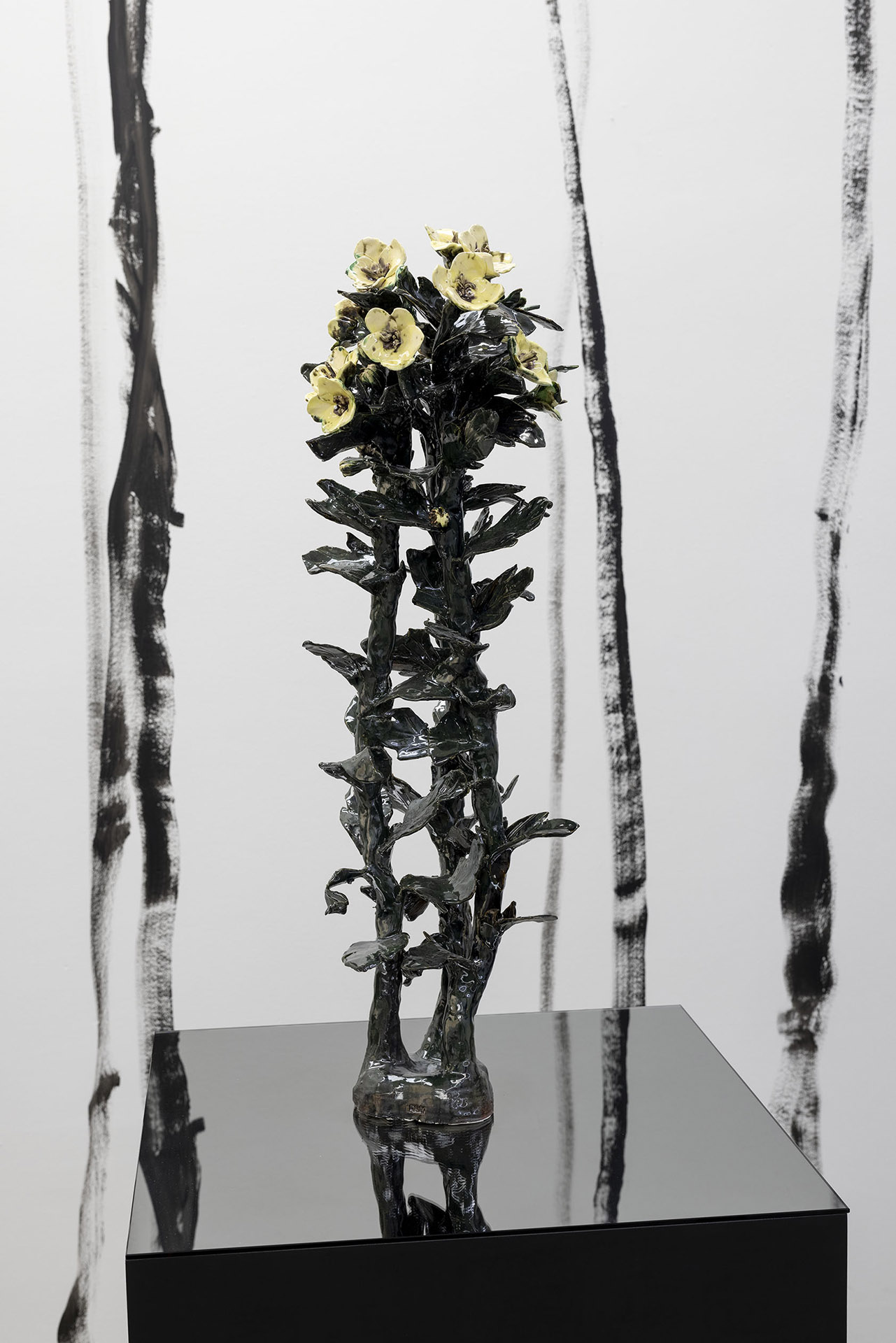 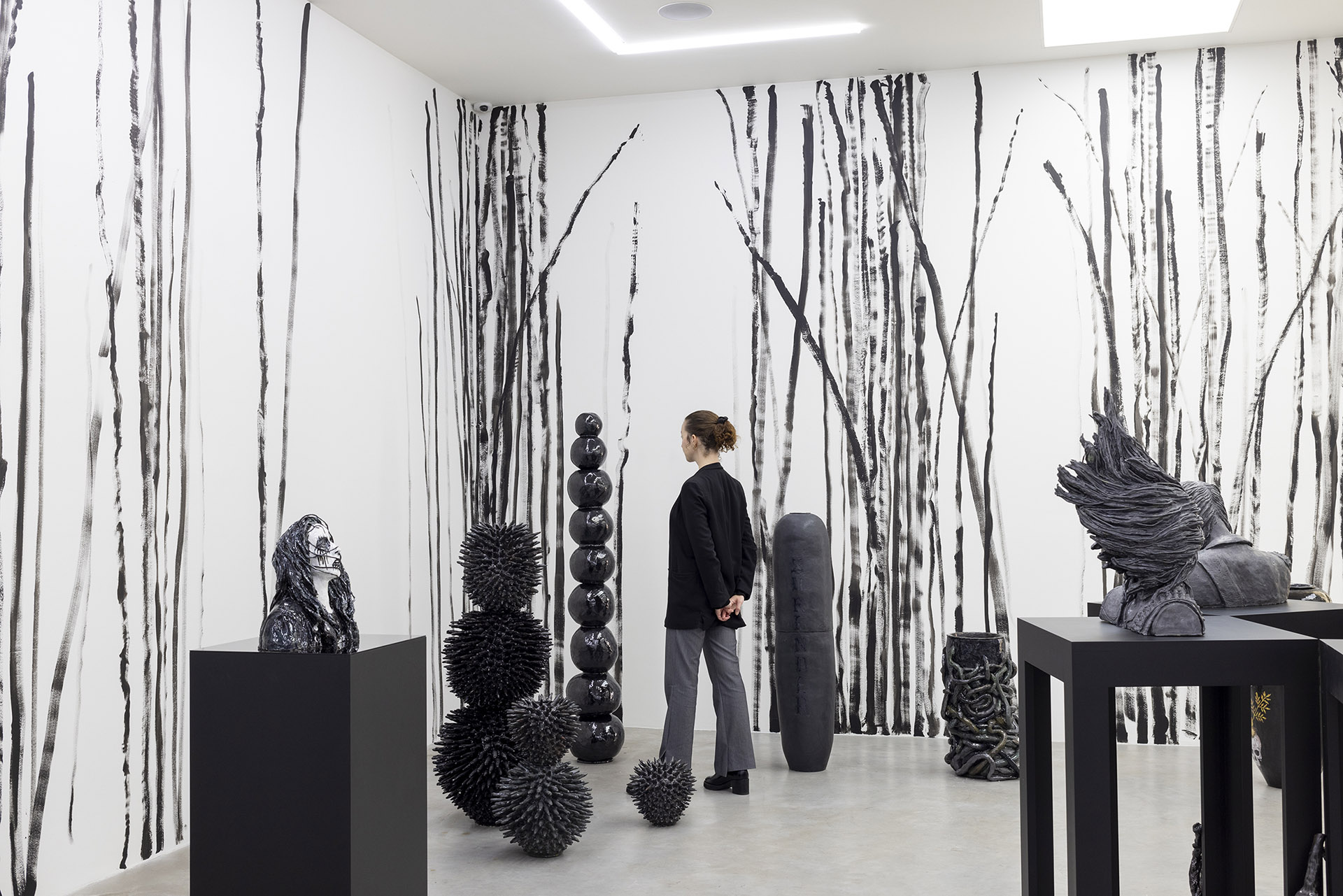