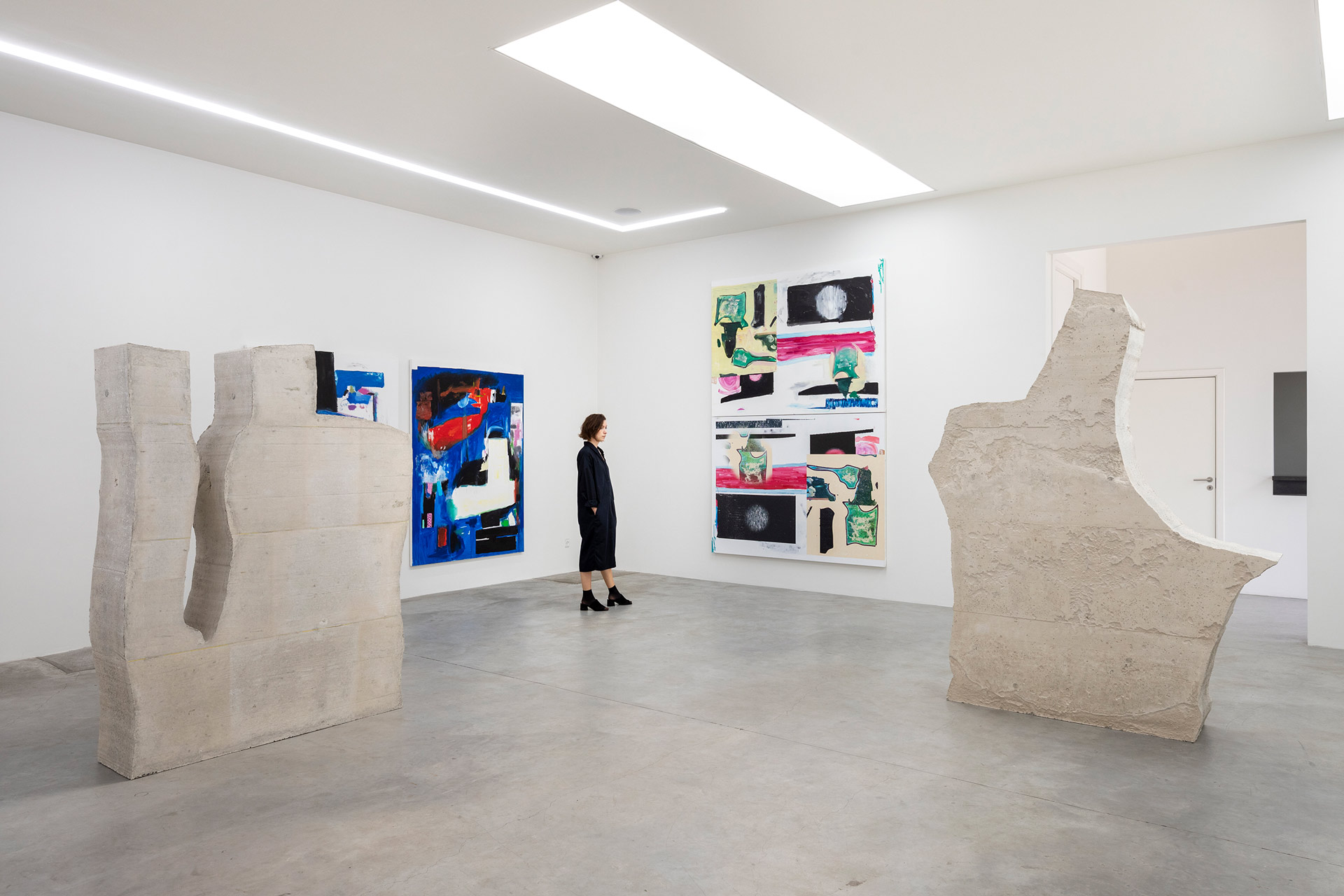 In Formering, the Swiss artist duo Linus Bill + Adrien Horni engages in a dynamic, elaborate and progressive art making practice where questions of origin, hierarchies, and definitions are intuitively challenged, and a shared alphabet of shapes emerges. Two minds, four hands, one work. The outset for their practice could be characterized as a failure, misfire or simply the result of not being satisfied artistically. Having worked on different series of paintings together, not finding them good enough for a life outside the laboratory, they started painting parts of the paintings over, this process resulted in three paintings – now known in the lineage of Bill and Horni’s work as the “Mother” paintings. Still not finding the result satisfactory, they photographed the “Mother” paintings which still remain unseen in storage, and reworked them digitally, resulting in hundreds of files of potential paintings. 21 of these digital files were translated into detailed physical paintin­gs using both silk screen, stencils and acrylic paint. Trying their utmost to match the digital echo, from endless creative ping pong sessions in Photoshop via file sharing, in the manual manifestation. These paintings naturally became known as the Heredity Paintings (190 x 140 cm), the first generations to evolve from the “Mother” paintings. Two Heredity Paintings are on display in Formering, an abstract alphabet of strangely familiar forms, digital residue translated perfectly by precision screen printing, gradual layering of colour and transparency. Meetings of shapes, mind puzzles, the paintings have a formal appearance, yet an easy, elegant, almost playful vibe. As the Heredity Paintings series were being shown in multiple locations in Europe simultaneously, a dilemma with a logistic twist arose. The artists solved it with the creation of the Heredity Ersatz Paintings, a series of reproductions of the Heredity works, or rather reinterpretations or transfigurations. Questioning the origin of originality, and how it translates and travels are central themes in Linus Bill + Adrien Horni’s practice which they engage with curiosity, intelligence and wit. An enigma to be explored rather than solved. In the Heredity Ersatz paintings, the artists sought to recreate the Heredity works precisely, same compositions and size, but with no use of screen printing and stencil techniques, only brushes and oil paint on canvas. They were painted at a faster pace with the duo working on multiple works simultaneously, like siblings or memories of the Heredity paintings. The Heredity Ersatz paintings in Formering, six in all, are composed from the same alphabet, but have a different appearance. Looking at the two series and motifs juxtaposed, the Ersatz works appear more fluid and intuitive which seems strange given their family history. Formering is the first exhibition to display the two series together, and it is intriguing to observe Linus Bill + Adrien Horni’s mutual alphabet transform and interact across the two series. A family tree of ideas and motifs. A language in process.

The last element in the exhibition is two new large cast concrete sculptures (190 x 150 x 37 cm / 210 x 160 x 37 cm) from the series Sculptures. The series takes it departure in an experiment in which the artists moved photos of a DIY bench and bookshelf around on an open B/W photo copying machine. The shapes recorded in the process were turned into the publication Sculptures, 2013, and only years later did the artists make the first three-dimensional concrete sculpture with departure in the publication. In this manner Sculptures, 2013, serves as a catalogue of potential sculptures, and the relation between work and publication is further underlined, as each sculpture bears the name of the page number it first appeared on. The two new sculptures, p.16and p.20, in Formering are raw and amorphous, while instantly recognizable as a part of the artists’ distinct vocabulary. And as with the Heredity paintings, Sculptures all evolve from the same set of “Mother” forms. Hence, the exhibition title Formering was born out of “form” and the Danish word for reproduction and multiplication, “formering”. Linus Bill + Adrien Horni practice art in an experimental and transparent manner, engaging ideas, process, form and presentation with a gifted and pragmatic originality.­ 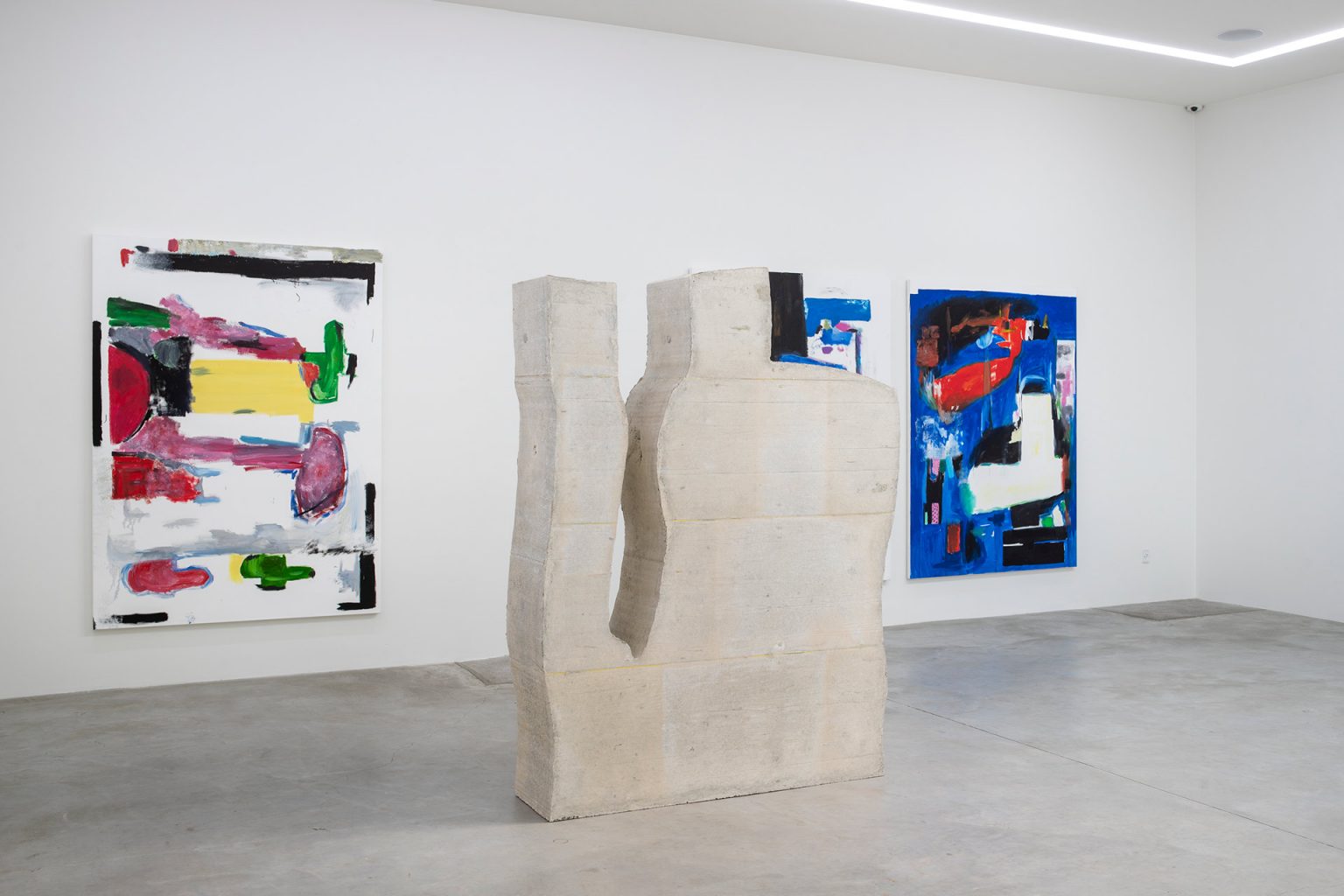 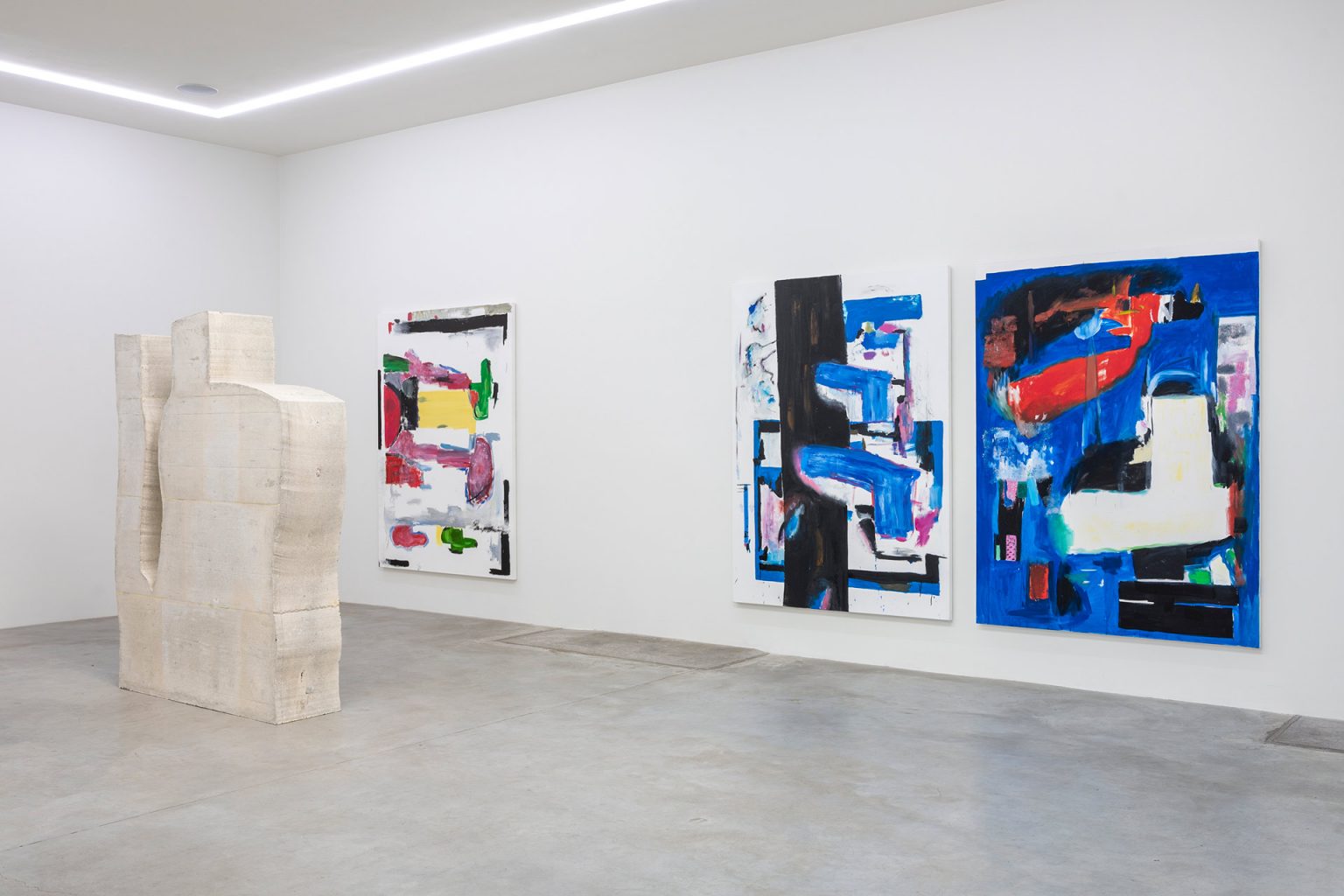 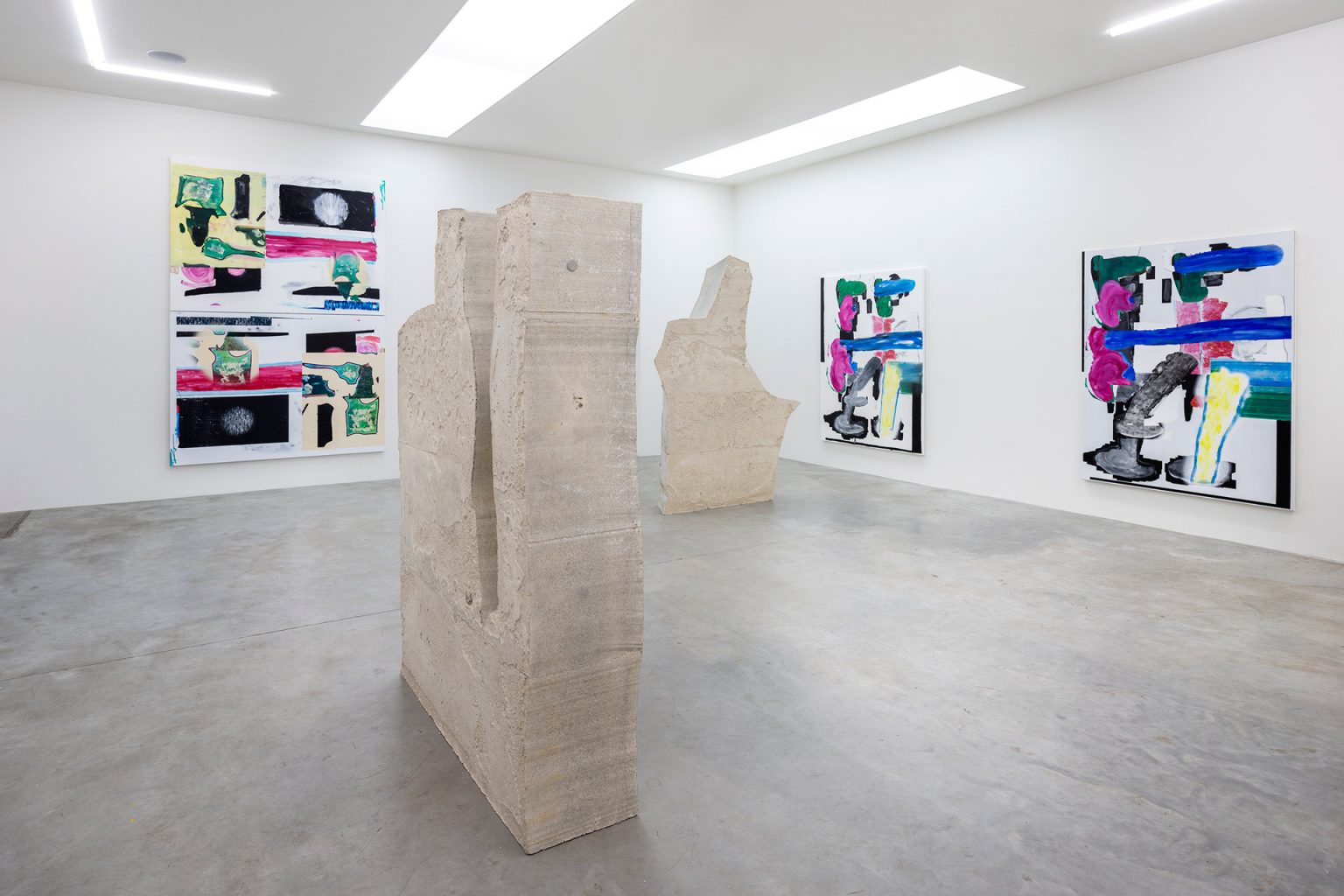 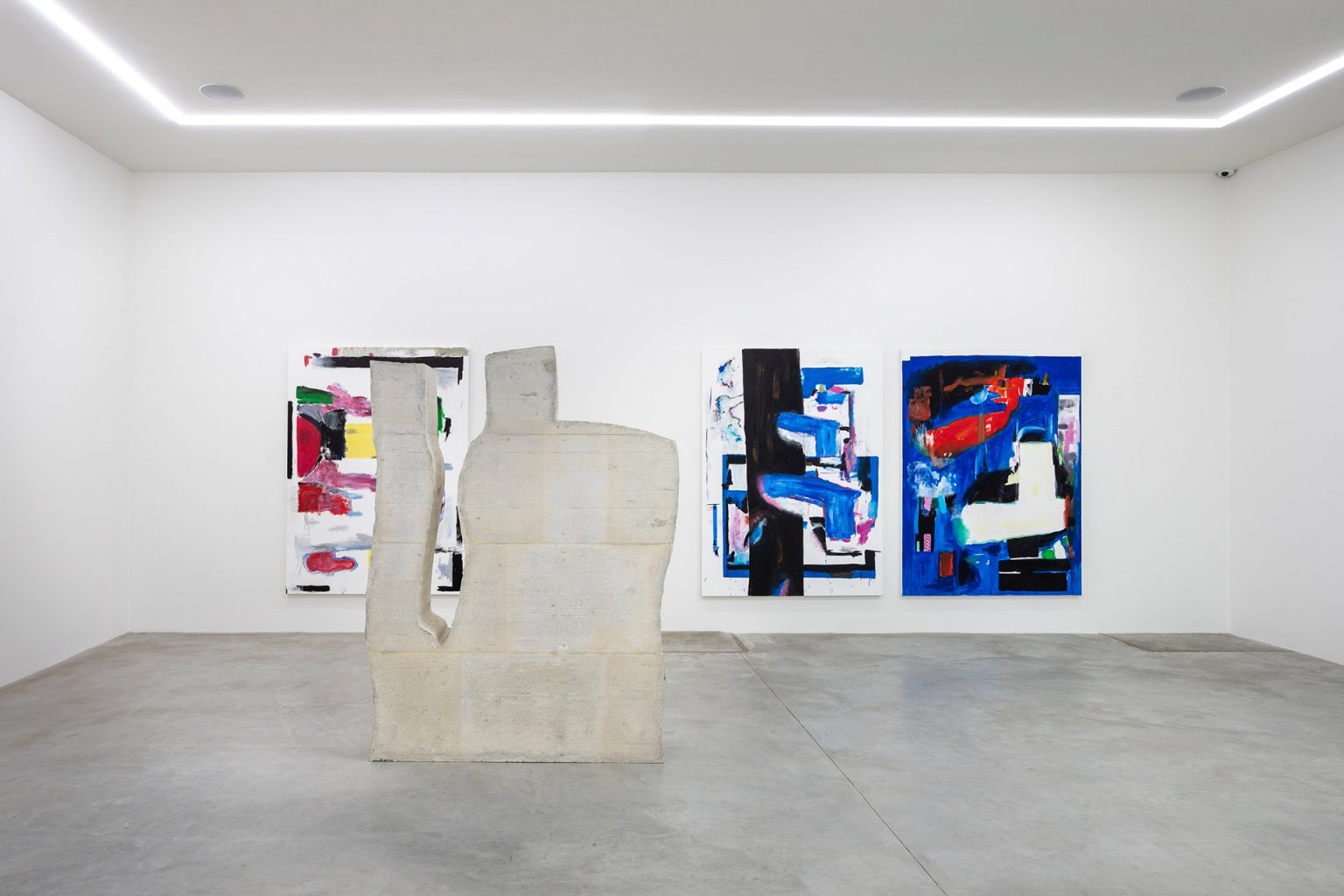