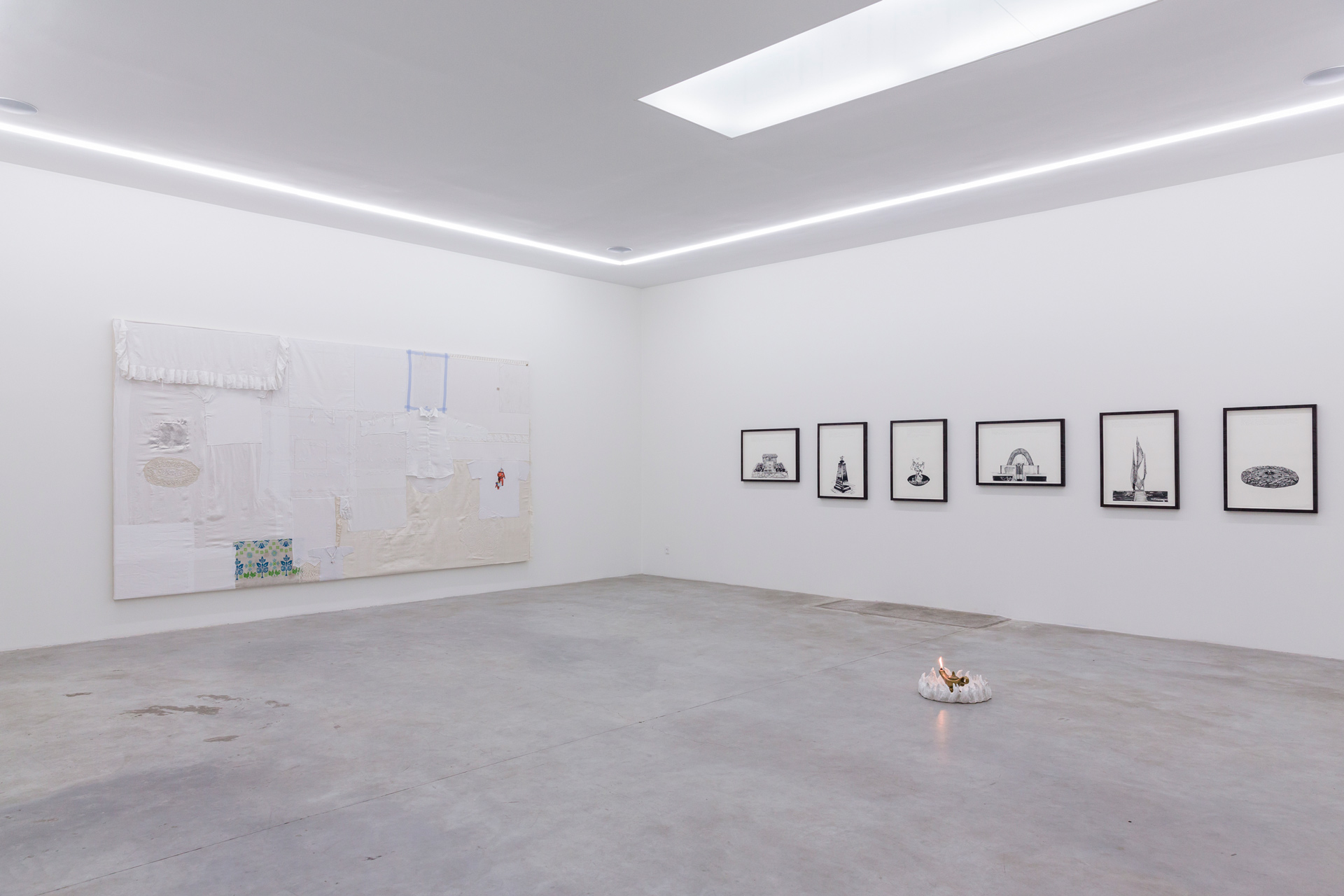 An eternal flame. A hopeful and sometimes painful reminder that we shall not forget the atrocities, loss or victories of the past. An empathic gesture, a nationalist monument or just another flame in the dark. A feeble light we pass on the road to the next conquest. Almost laughable viewed in the hash light of the human firestorm dictating the future of the planet. The hope of eternity for humanity. A commitment to hope. Wishful thinking?

Eternal flames are found around the world. Lit or extinguished. Sometimes they have served their purpose, good or bad, and are now defunct monuments to changing human behavior.

In 7 works on paper (70 x 50 cm) Hesselholdt & Mejlvang explores various eternal flames and their purposes. Amongst them The Flame of Hope in Ontario, honouring Sir Frederick Banting’s discovery of insulin and those affected by diabetes. It also serves as a reminder that insulin controls diabetes but does not cure it. Ultimately it stands for the hope that a cure will be found soon. It will be extinguished if a cure for diabetes is found, by the team responsible for finding a cure. In Chile The Eternal Flame of Liberty is extinguished. It was lit in 1975 by the dictator Augusto Pinochet to commemorate the Chilean coup d’état against Salvador Allende. It was part of a larger monument called Alter of the Fatherlandand was a symbol of the military dictatorship that ruled Chile from 1973 to 1990. It was extinguished in 2004. The works on paper present meticulous drawings of the flames with handwritten texts.

Centered in the gallery Hesselholdt & Mejlvang’s version of an eternal flame burns. The work consists of a Genie lamp on a white ceramic lake of fire and is titled The Wish, 2018.

A quietly monumental work Please Rest In Peace For We Shall Not Repeat The Error, 2018 (220 x 400 cm) sits on one gallery wall. The work is compiled from white pieces of cloth, stitched together in a large patchwork, the title of the work embroidered across the surface. The title of the work refers to The Peace Flame that burns in Hiroshima, Japan. The flame honours the victims of the atomic bomb that destroyed the city, but alsohas an additional symbolic purpose: the flame has burned continuously since it was lit in 1964, and will remain lit until all nuclear bombs on the planet are dismantled and the planet is free from the threat of nuclear annihilation. The artists asked people from around the globe to send them pieces of cloth and the personal stories woven into them. All these pieces of memory canvas are stitched together in the work and the stories are presented in written form, framed on the gallery wall. Serbian curator Maja Ciric sent a white bedsheet with the word “hope” embroidered on it. The bedsheet had been in her family for more than a hundred years. Professor Victor Valqui Vidal from Peru offered a pillowcase he inherited from his grandmother when he was four. He was the only one besides her that was allowed to sleep on the pillow before she died and she said it would protect him from evil.

Hesselholdt and Mejlvang has also commissioned a vocal performance by Philip Schneider revolving around The Bangles’ notorious hit song Eternal Flame. The work will be performed at the opening and documented on film on the occasion. Afterwards the film will be screened on a monitor as part of the exhibition.

With the exhibition Hesselholdt & Mejlvang thoroughly investigate the concept of the eternal flame. We share their process and journey, from sober intrigued pessimism, across reflection, to a genuine formulation of hope. Communally embracing the hopelessness of hope. In uncertain times, we must resist the comfortable position of nihilism and engage humanism.

Close your eyes, give me your hand, darling
Do you feel my heart beating
Do you understand?
Do you feel the same
Am I only dreaming
Is this burning an eternal flame?*

Sofie Hesselholdt (b. 1974) and Vibeke Mejlvang (b. 1976) are a Copenhagen based artist duo formed in 1999. They work in a variety of media and materials; installations, sculpture, ceramics, drawing and détourned ready-mades. Their practice focuses on the perils of contemporary life and the human condition and seeks to include and challenge its audience. Hesselholdt & Mejlvang often engage social and political issues through thorough research and flair for treating complex matters with dignity and humor. Initiating dialogue and creating space for reflection in a time where often there is none. Recent exhibitions include The Invisible Territory, Manifesta 12, Palermo, Italy, Native, Exotic, Normal, Uppsala Art Museum, Sweden, Cool, Calm and Collected, ARoS Museum, Denmark, The Invisible Territory, Heart Museum of Modern Art. In 2018 the duo will open a large scale exhibition at the historic venue Thorvaldsens Museum in Copenhagen, Denmark. A beautiful monograph, The Aryan Zebra, designed by StudioClaus Due was published in 2016 by Revolver Publishingand a new book called A Radically Better Tomorrow, also designed by Studio Claus Due, is being published by Roulette Russe in February 2019.

*Extract from Eternal Flameby The Bangles.

Thank you to Statens Værksteder For Kunst / Danish Art Workshops – we nearly burned you to the ground and not in a metaphorical sense. Your uncompromising facilities and aid made our ambitions possible.

Thank you Philip Schneider for the wonderful collaboration.

Thank you Olga Benedicte for your hard work making the exhibition come to life.