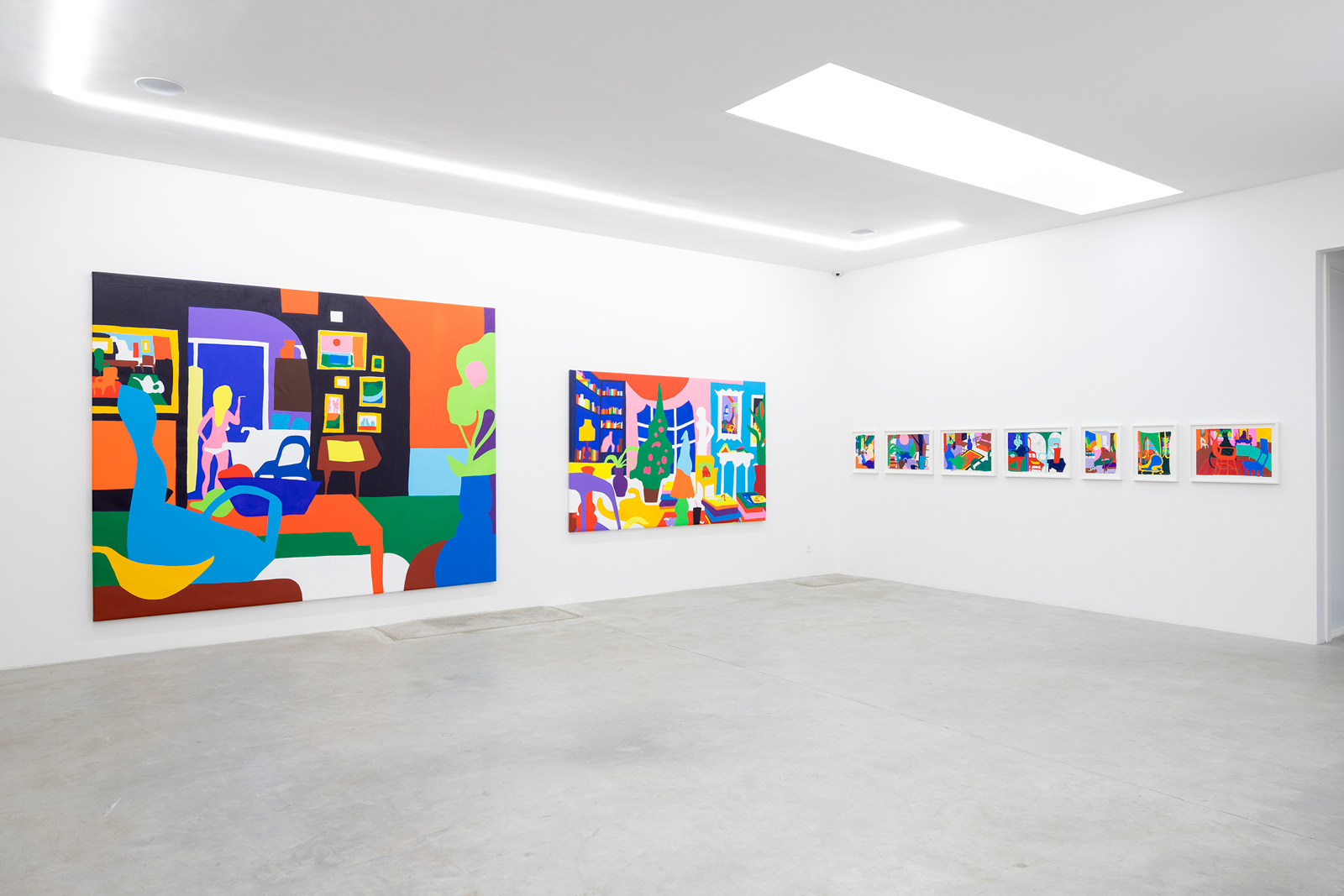 Complex compositions and vivid colours dominate Todd James’ new body of work Interior. Traditional perceptions of foreground and background are rearranged in the 9 large paintings on canvas and 8 works on paper. Objects like chairs, tables, flowers, books, paintings, fruits, and the occasional nude, that we recognize from the rich tradition of interior paintings, are transformed into an alphabet of shapes. The new works step out of art history and into the contemporary with an unconventional palette, a semi psychedelic mood, an array of bongs, teapots, mugs, ashtrays, and butts – both human and cigarette.

Todd James’ meditative interiors are fragile compositional clouds – blink – and you will see a different painting. Many of the paintings contain paintings arranged in a parlor style hanging – the paintings within the paintings are also interior paintings and some of these also contains paintings. These compositions lead your eye and mind deeper and deeper into colour fields where figuration dissolves and the imagination roam. The female nudes that populate some of the interiors, smoke cigarettes, observe, drink tea and contemplate. One can’t help but wonder if they are James’ idealised viewers. People thinking, taking their time – “Ain’t talkin’, just walkin’ through the world mysterious and vague” (Bob Dylan).

In earlier series of works James has worked his way around Somali pirates liberating goods, excessive military potential and various homages to young and old vandals. His work is never overtly political, but always seem to stem from a sentiment of now. In Interior the reflective mood is in startling contrast to the hysteria on the other side of the walls. The pensive calm feels defiant.

Todd James (b. New York 1969, USA) is a New York based artist and multi-disciplinary creator. His work is informed by the images we know from the constant stream of media we are swimming, or sometimes it feels more like drowning, in. He distils these images, giving the viewer a chance for brief contemplation, in a time that rarely offers such. He has developed a distinctive artistic style informed by the world of cartoons and graffiti as well as painters such as Willem de Kooning, Peter Saul, Matisse and Franz Kline. His paintings are colourful, often humorous, bold and subtle at the same time. He has exhibited extensively around the world, including two participations in The Venice Biennale. James has been an integral part of the genre expanding exhibitions: Street Market, Beautiful Losers and Art In The Streets. James has painted graffiti in New York under the moniker REAS since the early eighties and collaborated with Beastie Boys, Iggy Pop and Eminem amongst others. Recent solo exhibitions include We Are One at Galeria Javier Lopez & Fer Frances, Madrid, Spain, 2017 and Stay Golden, AishoNanzuka, Hong Kong, China, 2016.