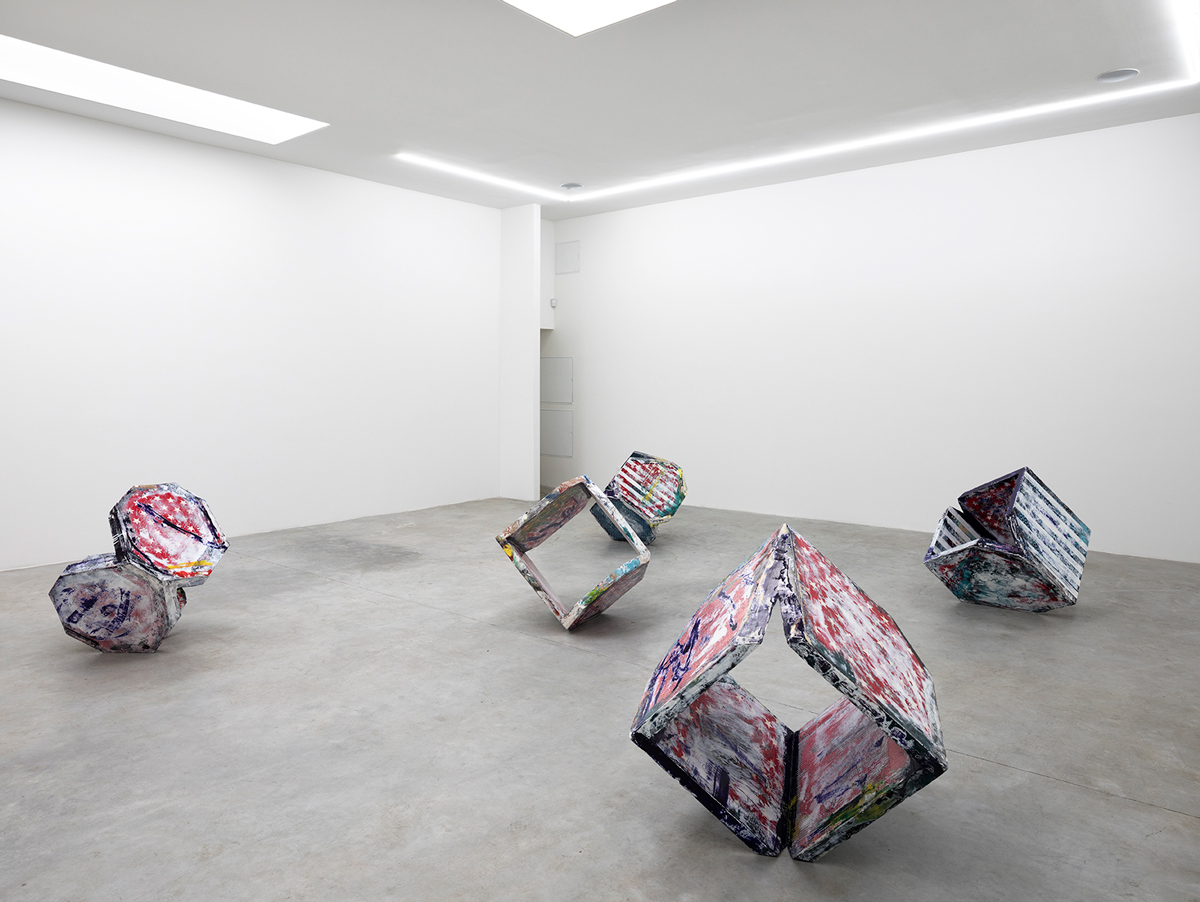 Techno Fossil Tumbleweed is a new suite of sculptures by Thomas Øvlisen. The title of the group of 5 sculptures refer to the relatively new phenomena (in the four and a half billion years of the history of our planet) of technofossils – the vast and unprecedented impact humans are leaving on earth.

“Paleontologists call preserved animal-made structures trace fossils. Most animal species make only one – or at most a very few – different types of trace. For example, dinosaurs made footprints and worms leave burrows. Just one species, though — Homo sapiens — now manufactures literally millions of different types of traces that range from nano-scale to city-sized.” Jan Zalasiewicz, University of Leichester, Britain, in Tech Times, March 2014.

Øvlisen’s beautiful new body of hollow, cubical, offset, jagged sculptures resemble a contemporary nonchalant Stonehenge in the gallery space. Otherworldly objects from a near past future. Each sculpture is roughly a cubic meter, created in polystyrene, fabric, epoxy and multiple layers of auto lacquer. The viewer is invited to gently engage with the sculptures, position them as they like, and create their personal constellations. This makes for a both transgressive and almost meditative experience. Creating space for contemplation, a true privilege in our time.

“Millions of years from now, long after humans have gone, technofossils will be the defining imprint on the strata of the human epoch that people increasingly call the Anthropocene. If any paleontologists were to appear on — or visit — the Earth in the far geological future, they will think the technofossil layer more weird and wonderful, by far, than dinosaur bones” Mark Williams, University of Leichester, Britain, in Tech Times, March 2014.

Thomas Øvlisen, born 1974, Denmark, lives and works in the periphery of Copenhagen.
He was educated from Rhode School of Design, Providence, USA. He has recently exhibited with SADE in Los Angeles and has a solo show with Klaus Von Nichtsagen in New York in 2017. Øvlisen’s practice keeps pushing the language of booth sculpture and abstraction forward. Engaging with artists past and present while firmly developing a truly original expression.